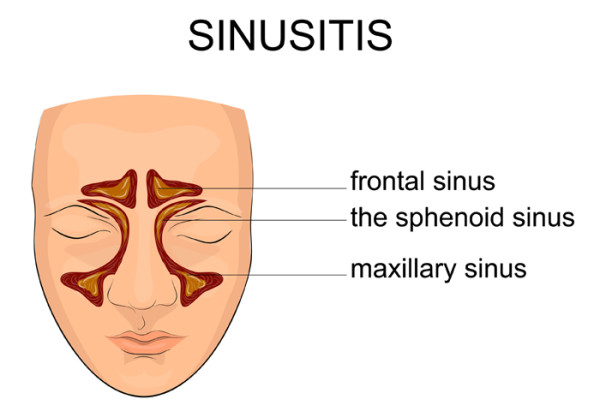 Sinusitis affects 29.4 million U.S. adults, or around 12 percent of the adult population, every year.

Sinusitis, also known as sinus infection, is an inflammation of the sinus tissue. When experiencing sinusitis symptoms, your sinuses become blocked with fluid, bacteria, viruses, and fungi can grow and lead to an infection.

There are several types of sinusitis. The main differences are the severity and length of flare-ups. The Centers for Disease Control & Prevention (CDC) defines the forms of sinusitis as follows:

The ailment affects just under 30 million Americans every year (or 12.3 percent of the adult population), according to the National Health Interview Survey (NHIS). The same data shows that 11.7 million physician office visits every year result in chronic sinusitis diagnoses.

Conditions that can cause sinusitis include bacteria, fungi, or viruses related to the common cold, allergic rhinitis (swelling of the lining of the nose caused by exposure to allergens and smoke), nasal polyps (small growths in the lining of the nose), or a deviated septum (a shift in the nasal cavity that is often hereditary).

The main symptoms of acute sinusitis, the most common type of sinusitis, include one or more of the following:

A physical exam can determine whether your sinuses are inflamed and whether you have nasal polyps. Other tests may include a nasal endoscopy—a tube-like instrument with tiny lights and cameras that examines the interior of your nose and sinus drainage areas—as well as X-rays, allergy and blood tests, and a CT scan.

How to clear up sinusitis? Over-the-counter decongestants, antifungal medicine, and nonprescription decongestant nasal drops or sprays can be effective at controlling mild symptoms but should be used for only a few days. Antibiotics are prescribed for 10 to 14 days for more severe cases.

For chronic sinusitis, your physician might prescribe oral steroids to reduce inflammation. (See also “Sinus Infection: What Medications Do You Need?“)

A vaporizer (or simply inhaling steam from a pan of boiling water) also may alleviate congestion. Likewise, warm compresses can help to relieve nasal and sinus pain.

Antihistamines may be recommended for the treatment of infections caused by allergies.

The best way to prevent sinusitis is to reduce exposure to your triggers. For instance, protect yourself from bacteria, viruses, and fungus by keeping your home and work environment clean, smoke-free, and dry. Wash your hands regularly, especially during cold and flu season.

Another option is to flush your nasal passages with a store-bought or home-made solution of hypertonic saline (salt water), which can improve reduce nasal swelling and remove debris and allergens.