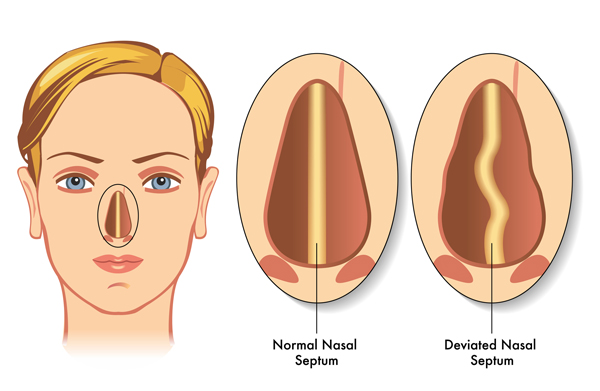 Breathing can become more difficult when the nasal septum deviates to one side or another.

The nasal septum is the bone and cartilage that divide the nasal cavity of the nose in half. Sometimes it can deviate to one side, which narrows or blocks the nostril and can make breathing difficult.

In most cases, deviated septum symptoms and the condition itself pose no serious medical problems. However, some people experience difficulty breathing. Your doctor may refer you to an otolaryngologist, who will examine your nasal cavities. If the deviation causes lifestyle or medical problems, surgery to realign your septum may be recommended.

Causes: Most people who live with deviated septum symptoms have some sort of misalignment. The cause is unknown—some are just born with it. Sometimes, however, a deviated septum can result from a nose injury.

Symptoms: Besides difficulty breathing at times, another common symptom of a deviated septum will include regular or repeated nasal congestion. Sometimes this congestion is more prevalent on one side of the nose.

Other deviated septum symptoms include the following annoying conditions:

Treatments: In some cases, your healthcare provider can relieve deviated septum symptoms by prescribing medications. However, if these medications do not offer adequate relief, an outpatient surgical procedure called septoplasty can repair a crooked septum and ultimately improve breathing.

In carrying out the surgery, a small incision is made in the septum to remove the excess bone or cartilage. The surgery isn’t a long process; it typically takes between one and two hours. Internal splints or soft packing material may be put into the patient’s nose to stabilize the septum as it heals.

For mild cases of deviated septum, a newer procedure may be used to avoid surgery that involves using balloon septoplasty techniques.