Home » Daily » Lung Health » Is Vaping Bad for You? A Look at Vaping vs. Smoking 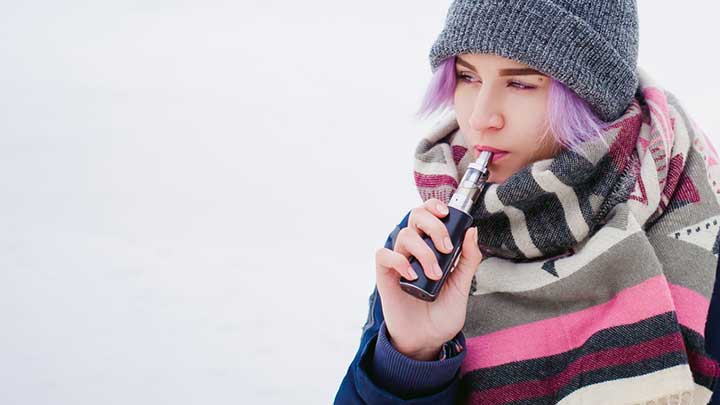 While vaping is not a harmless activity, many experts suggest that it is the lesser of two evils

My husband has been on and off cigarettes for as long as I’ve known him. He recently turned to vaping to try to kick the habit. While the smell of strawberry candy and chai tea is certainly more appealing than that of cigarettes, I had some serious doubts about the safety of inhaling such factory-crafted flavors into one’s lungs. Is vaping bad for you? It turns out, my misgivings were not unfounded.

A vaping device, officially known as an electronic nicotine delivery system (ENDS), heats a liquid, sometimes called e-juice, until it is a vapor that the user inhales.

There are many varieties of e-juice. The simplest varieties can be made of just two ingredients: vegetable glycerin, which is used in foods, cosmetics, and as a replacement for alcohol in herbal and botanical tinctures, and flavoring.

Other varieties also include:

Nicotine Is Still Harmful, Even When Vaped

People who are trying to quit smoking often begin with the nicotine versions to ease their cravings. But even though the nicotine is not being burned, it is still damaging to lungs, found Irina Petrache, PhD, and colleagues.[1,2] Inhaling nicotine in any form promotes lung inflammation, compromises lung endothelial barrier function, and decreases lung endothelial cell proliferation, her team found.

If You Use a Non-Nicotine Liquid, Why is Vaping Bad for You?

Even the non-nicotine e-juices can be problematic, Dr. Petrache and colleagues found.[1,2] When researchers look closely at what’s in vape liquids, they’ve found a variety of additional substances.

Because vaping has a better odor than traditional cigarettes, I’ve noticed the people feel much more comfortable about smoking them indoors or in front of children. It’s hard to think of flavors like waffles and ice cream bring as toxic as smoke, but it’s a false security.

The World Health Organization wants to ban indoor vaping, noting that: “The fact that ENDS exhaled aerosol contains on average lower levels of toxicants than the emissions from combusted tobacco does not mean that these levels are acceptable to involuntarily exposed bystanders.” [8]

“In fact, exhaled aerosol is likely to increase, above background levels, the risk of disease to bystanders, especially in the case of some ENDS that produce toxicant levels in the range of that produced by some cigarettes.”[8]

One study found that vaping worsened indoor air quality by increasing the concentration of nicotine, particulates, polycyclic aromatic hydrocarbons, and aluminum.[5] The Bavarian Health and Food Safety Authority reported that these compounds that have been linked to cancer as well as lung and cardiovascular disease.[5]

But is Vaping Better Than Smoking?

While vaping is not a harmless activity, many experts suggest that it is the lesser of two evils. Although formaldehyde levels are shown to be higher, a study found that some toxic substances have levels 9 to 450 times lower than in regular cigarette smoke.[3]

If you are trying to quit smoking, vaping may be a healthier option in the short-term, but the long-term effects are simply unknown. Instead, consider other smoking-cessation aids, such as NAC, to help you kick your habit. Also check out the smoking cessation ideas here.

Have your tried vaping to quit smoking? Have you tried other smoking cessation strategies? Please share your experiences in the comments section below.