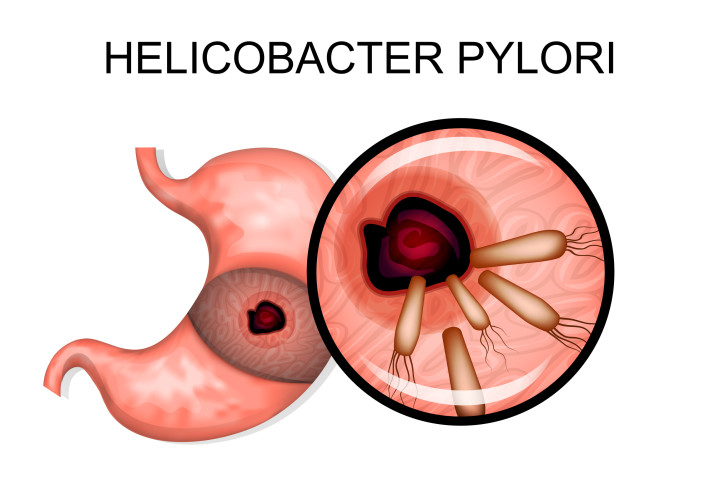 Helicobacter pylori (H. pylori) are bacteria that grow in the mucous layer of your stomach. Almost everyone with this infection has some inflammation of the stomach called gastritis, but the inflammation is usually not serious enough to cause symptoms or complications like a stomach ulcer. Long-term infection has been linked to an increased risk of stomach cancer. [1]

How Do You Get H. pylori?

The exact way you become infected with H. pylori is still unknown, but it can be passed from person to person. [2] The most common way H. pylori pass from person to person is through contact with the stomach contents or the stool of an infected person. This is called oral-to-oral or fecal-to-oral contact. [3] A common fecal to oral spread occurs if an infected person does not wash their hands after a bowel movement and then touches food that you eat. [1]

H. pylori can also be found in saliva, so it may be spread through kissing. This infection most often spreads between people in close contact, such as families or people who live together in nursing homes. H. pylori infections are more common in African, Hispanic, and Asian Americans. [1]

According to the American College of Gastroenterology, most H. pylori infections start in childhood and never cause any symptoms. [4] The exact way H. pylori infect children is not known, but the infection probably spreads from close contact with an infected family member. Children who live in a home with many people are at higher risk. Why some people develop symptoms and others don’t is not known, but may be due to differences in people’s immune systems. [2]

What Are the Symptoms of H. Pylori?

How Is H. pylori Diagnosed and Treated?

Because H. pylori is one of the most common, long-term infections in humans, and most people do not have symptoms or problems, doctors do not routinely test for it. You may be tested if you have symptoms. [4] There are several ways to diagnose H. pylori: [1-3]

Antibiotic treatment for H. pylori is the recommended treatment protocol

If you test positive for H. pylori, you should be treated. The type of treatment depends on where you live, your exposure to antibiotics, and any history of resistance or allergies to antibiotics. There are three recommended treatments for initial therapy: [4]

Treatment lasts for 10 to 14 days. During that time symptoms should improve. Four weeks after treatment ends, you will be tested again with a breath test, stool test, or endoscopy test to make sure all the H. pylori is gone. Once all the bacteria are gone, you cannot spread the infection after successful antibiotic treatment. [4]

Treatment is usually successful, but in a small percentage of people H. pylori does not respond to treatment or comes back after treatment. In these cases, a different antibiotic treatment combination will be used. [3]

Can You Prevent H. pylori Infection?

Because this infection is so common and most people have no H. pylori symptoms, it is hard to avoid it. There may be ways that H. pylori passes from person to person that are not yet known. There are no special diets, foods, or supplements that are recommended. You may reduce your risk by washing your hands after changing a diaper or coming into contact with another person’s stool or vomit. Making sure the food you eat and the water your drink is tested and safe is another way to lower your risk of contracting H. pylori. [1-3]