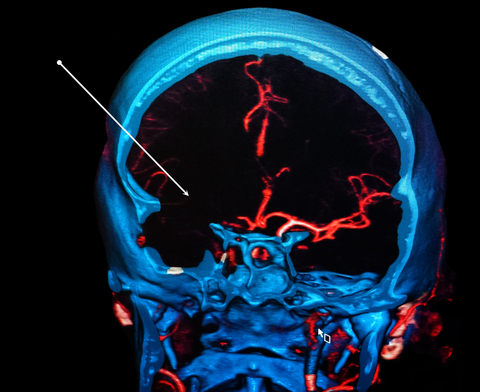 Sometimes a clot that develops elsewhere in the body—typically the heart, aorta, or carotid arteries in the neck—breaks off and travels in the bloodstream to the brain. This type of clot is called an embolus. When an embolus lodges in a brain artery, stopping blood flow, it produces an embolism that causes an embolic stroke. In addition to a blood clot, an embolus can be an air bubble or piece of debris.

Ischemic strokes are categorized according to the severity and duration of symptoms:

Emergency treatment for ischemic stroke is a powerful clot-busting medication called tPA. It must be given within 4½ hours after symptoms begin, keeping in mind that the earlier it is administered within that time period, the better the chances of a favorable outcome.

For patients diagnosed with ischemic stroke after the treatment window has passed, no medication to restore blood flow has been proven effective. However, some patients may benefit from mechanical clot removal up to six hours after stroke onset with a technique called thrombectomy.

Four different devices can be used to remove a clot:

The MERCI Retriever is inserted in an artery, where it can be maneuvered directly to a clot that is blocking blood flow, capture it and remove it. (MERCI stands for Mechanical Embolus Removal in Cerebral Ischemia.) The device is a nitinol wire that spontaneously assumes a corkscrew shape as it moves toward the clot. The first few loops of the spiral are deployed beyond the clot, and the last loops are deployed within the clot to ensnare it.

Two clot-removing devices use retrievable stents to extract blood clots: the Solitaire Flow Restoration Device and the Trevo Retriever. A stent is a small mesh tube that can be used to open a narrowed artery. The Solitaire and Trevo devices consist of a stent on the end of a thin catheter, which is threaded through an artery to the location of the blood clot. The clot is trapped in the stent, which is then removed. This restores blood flow through the artery.

A mechanical device called the Penumbra System removes blood clots by aspiration. The technique involves delivering a catheter into the clot and using continuous suction to remove the clot.

The extent of your disability (if any) will be determined after the stroke has ended and your condition has been stabilized. The length of time you will need to recover from a stroke will depend on its severity. Fortunately, about 50 to 70 percent of stroke survivors are able to regain functional independence. Others are permanently disabled to various degrees.