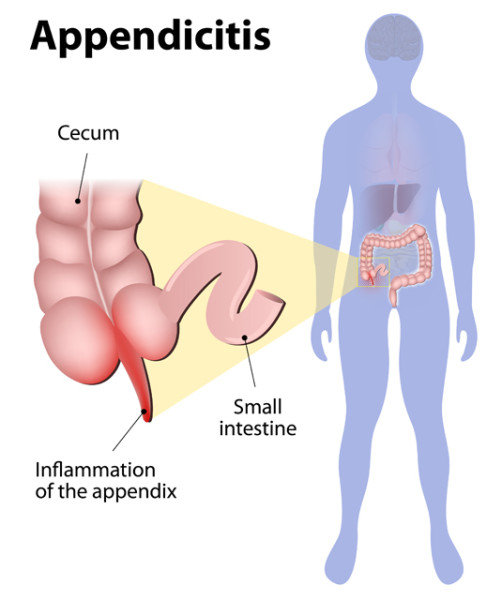 The appendix is a small appendage located at the beginning of the colon, where it intersects the small intestine. Appendicitis symptoms can include nausea, vomiting, constipation, or diarrhea, among others.

Appendicitis symptoms—including nausea and vomiting—appear if the appendix, the small, tube-like pouch in the abdominal area, becomes inflamed from blockage. The resulting condition is serious enough to require immediate medical attention.

While appendicitis symptoms cause pain in your lower right abdomen, they can also begin around the navel and spread from there. As the inflammation worsens, the pain become more severe and can strike when you cough, walk, or make sudden movements.

The seven most common appendicitis symptoms include:

The appendix is attached to the first part of your large intestine and just to the lower right side of your abdomen. The appendix has no known function, and for many people it causes no problem throughout life.

Appendicitis symptoms occur when there is a blockage in the lining of the appendix, which then causes an infection. As the bacteria multiples, the appendix becomes inflamed, swollen, and filled with pus. It not treated, if can lead to two serious problems:

Although anyone can develop appendicitis, most often it occurs in people between the ages of 10 and 30. You should seek medical care if have any appendicitis symptoms. Your doctor may be able to diagnose appendicitis from a physical exam by applying gentle pressure to the painful area. Women may be given a pelvic exam to check for possible gynecological problems.

Other tests that may be performed include:

An appendectomy to remove the inflamed appendix is the usual treatment. There are two types of the surgery: open and laparoscopic.

In general, laparoscopic appendectomy allows you to recover faster and heal with less pain and scarring. It may be better for people who are elderly or obese. No matter which option is performed, expect to spend one or two days in the hospital afterwards.