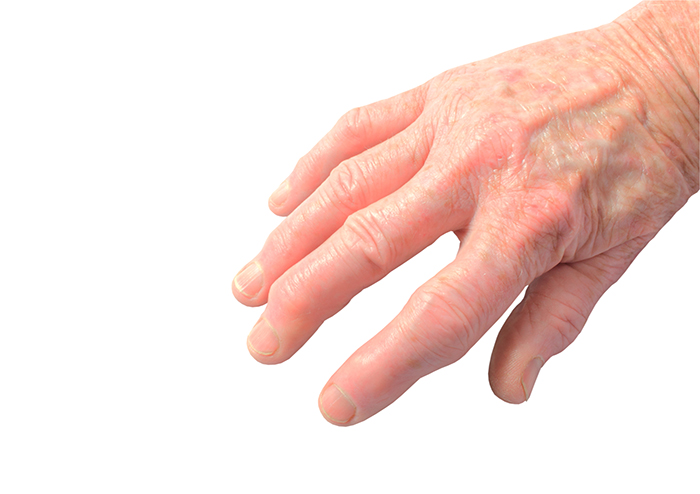 In the vast majority of people with psoriasis, the skin disease precedes the arthritis, but 10 to 15 percent of people will have both skin and joint symptoms. Having the skin disease does not guarantee that you’ll develop psoriatic arthritis; in fact, only 15 percent of people with psoriasis are afflicted with psoriatic arthritis. The condition can affect many different joints, including the lower back, knees, ankles, wrists, and fingers (particularly the distal interphalangeal joint, or last joint of the finger) as well as tissues such as tendons and ligaments surrounding the joints.

People may present with one (monoarticular), several (oligoarticular), or many (polyarticular) different joints affected. The most common presentation, though, is mild oligoarticular disease, which progressively involves more joints over time. Twenty percent of people suffering from psoriatic arthritis will ultimately develop a severe, erosive form of the disease.

What Are the Symptoms of Psoriatic Arthritis?

Psoriatic arthritis can cause pain, stiffness, swelling, and tenderness of the affected joints. Painful swelling of toes and/or fingers, called dactylitis, resembling swollen sausages is a distinctive clinical feature. Often these digits will have their nails affected by pitting or ridging.

Inflammation causing pain at the points of tendon insertion on bones, called enthesitis, is another distinct symptom. Symptoms may wax and wane in individuals and affected joints may vary between flares, but evidence has demonstrated that irreversible joint damage can occur if treatment is not initiated early in the course of the disease.

How Is Psoriatic Arthritis Diagnosed?

Diagnosis of the disease can be difficult because there are no universally accepted diagnostic criteria to date. Furthermore, symptoms may mimic those of other inflammatory arthritides such as rheumatoid arthritis or gout. Physical examination of joints, blood tests looking for markers of inflammation but also used to rule out other diseases, and x-rays or magnetic resonance imaging (MRI) of joints are all part of the diagnostic process. In some individuals, a biopsy of skin lesions is also needed.

Early treatment of psoriatic arthritis has proven to be critical in preventing permanent joint damage. Pain control with non-steroidal anti-inflammatory drugs (NSAIDs) such as ibuprofen or naproxen has been a mainstay of symptomatic treatment. Disease-modifying antirheumatic drugs (DMARDs) such as methotrexate and sulfasalazine used to treat diseases like rheumatoid arthritis have traditionally been used in psoriatic arthritis therapy.

The use of methotrexate, however, is limited because of its potential liver toxicity and because of its potential to cause birth defects. Sulfasalzine has been very effective in treating peripheral psoriatic arthritis symptoms (legs, arms, fingers, and toes) but is less effective in treating skin or axial (spine/lower back) symptoms. Cyclosporine, leflunomide, and azathioprine are other DMARDs that have been used in some patients, but there’s a paucity of research examining their efficacy.

More recently, a category of drugs called biologic response modifiers have been employed based on research identifying the immunologic factor tumor necrosis factor alpha as a critical part of the disease pathology. Examples of these drugs include etanercept, infliximab, and adalimumab. This category of drugs has proven to be extremely effective in treating peripheral, axial, and skin symptoms in patients with psoriasis and psoriatic arthritis and represents a significant breakthrough in treatment options.