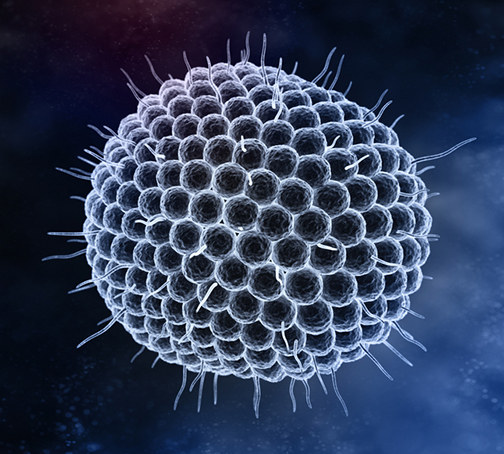 Varicella zoster virus or varicella-zoster virus (VZV) is one of eight herpes viruses known to infect humans and vertebrates. VZV affects only humans, and commonly causes chickenpox in children, teens, and young adults and herpes zoster (shingles) in adults and rarely in children.

Your doctor—and countless TV commercials—recommended a shingles vaccine. You didn’t get around to it, and now you’re feeling a slight itch or tingling sensation. No big deal. But a few days later, a rash of blisters filled with fluid appear and cover the front and back of your body, like you rolled in a patch of poison ivy. But you didn’t. You got shingles, also known as the virus herpes zoster—an often excruciatingly painful condition where even the mildest touch can make the most stoic person wince.

Shingles blisters typically form on the body but can also affect the face. They usually last about 10 days, form a crust, and then fall off. For some people, the process can take more than five weeks to complete. And although the rash improves, the pain can last longer.

Twenty percent of those who get shingles develop a condition known as post-herpetic neuralgia (PHN), a nerve pain without the rash that can persist for years. The older you are when you get shingles, the more likely you are to develop PHN. The pain is so severe that it can cause insomnia, weight loss, and depression.

(For more on shingles complications, go to this National Institutes of Health page.)

The shingles vaccine doesn’t guarantee you won’t get shingles but it does cut your risk in half. And if you do get it, the vaccine reduces the severity and possibility of long-term complications.

Shingles Vaccine: Why You Need One

Shingles develops in people who have had chickenpox. It is a reactivation of that virus, which remains dormant in the body after the initial disease has passed.

Those who are most susceptible are age 60 and older, are under stress or ill, and have a weakened immune system because of age, disease, or medications. Family history also might make a person more susceptible to shingles.

Shingles is not contagious, but the virus that causes it can be spread by direct contact from a person who has the condition to another person who has not had chickenpox. That person will get chickenpox, but not shingles.

Who Is Most Susceptible to Shingles?

Of the one million cases of shingles reported annually, more than half occur in people over the age of 60. Shingles affects women nearly 40 percent more often than men.

As age goes up so too does the possibility of post-herpetic neuralgia. Half the people over age 60 who get shingles also develop PHN. And 75 percent of people over 70 will get this painful condition that can last anywhere from months to years. A shingles vaccine can reduce the risk of PHN by 65 percent.

If you feel pain, tingling, and itching on one side of your face or body and have had chickenpox, you might be feeling the onset of shingles. See your doctor right away. The condition can be treated with antiviral medications. They are most effective when taken within 72 hours of initial symptoms.

If you wait too long, antivirals are no longer an option but there are some medications that can help with the pain. Topical medications such as a lidocaine patch can help as can some pain relieving drugs. (See also “Managing Shingles Naturally.”)

THE SHINGLES VACCINE: ALL TOO COMMONLY AVOIDED

The Centers of Disease Control and Prevention recommends the one-time shingles shot (Zostavax vaccine) for people over the age of 50.

Despite the proven effects of this vaccine, a study of 700,000 Medicare patients showed that less than 4 percent of them got the shingles vaccine. Cost is often cited as reason why people don’t get vaccinated. The fee can be $150 or more. Medicare will cover some of the cost for those who have a Medicare Part D prescription plan. Most private insurers may cover the cost for those over 60 years of age and some may cover it for those over age 50.

Getting a shingles vaccine sooner rather than later is recommended because the older you get, the less effective the vaccine. After the age of 70, the vaccine is about 40 percent less effective.

Originally published in February 2017 and updated.