Home » Daily » Nutrition » Bottled Water vs Tap Water: Which Should You Drink? 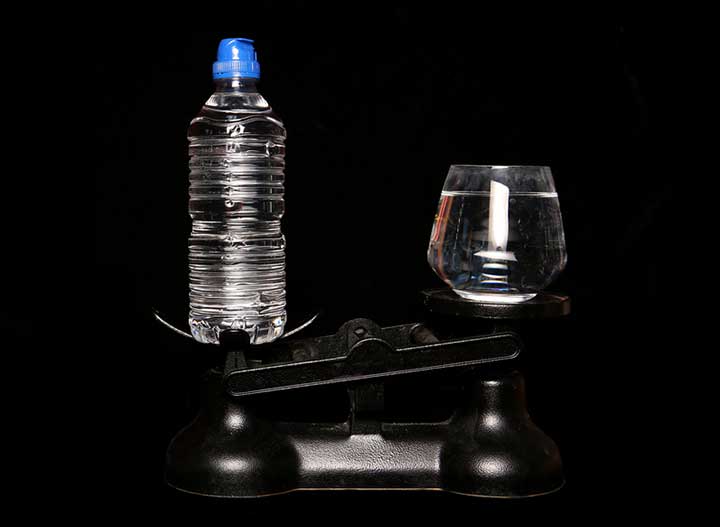 Many believe that bottled water is more highly regulated than tap water.

Bottled water is quick and easy to grab when you’re on the go. It’s touted as pure water extracted from beautiful glaciers and pristine streams. It’s also pricey. Tap water, on the other hand, is easily accessible and free. While some claim tap water contains unhealthy levels of chemicals, others say bottled water isn’t as stringently regulated. In the age-old debate between bottled water vs tap water, only one comes out on top (or on tap, in this case). Which will you choose?

Over 90 billion liters of bottled water are produced worldwide and they’re worth an estimated 22 billion dollars, found a study commissioned by the World Wildlife Foundation (WWF). This has made it the “fastest growing drinks industry in the world,” the study’s researcher says. But is bottled water worth the extra money? Is it safer to drink than tap water? The experts say, “no.”

“It is a mistake to assume that bottled water is safer or cleaner than tap water from public water supplies in the United States,” says Eric A. Goldstein, Senior Attorney for the Natural Resources Defense Council. The WWF agrees, stating that “bottled water may be no safer or healthier than tap water in many countries while selling for up to 1,000 times the price.”

So why the faith in bottled water? We live in an age where multimedia bolsters conspiracy theories globally. Yes, a lot of concerns over contaminated drinking water are valid. Remember the cases of unsafe drinking water found in communities such as Sebring, Flint, and Hinkley? They’re proof that the system doesn’t always work as well as it should.

According to an article in the New York Times Magazine, there are between 3.3. and 10 million lead pipes that haven’t been replaced in the U.S. despite Congress banning lead water pipes 30 years ago. There are also other factors at play in creating unsafe drinking water—too much road salt, for instance, can creep into rivers, rising chloride levels. And the Environmental Protection Agency found 100 chemicals and 12 microbes that are unregulated despite even though they can pose a potential risk to public water.

In most cases, however, “the nation’s large public water supplies are generally safe,” says Goldstein. That said, he urges residents to be proactive when it comes to the safety of their water. Always “review the annual water quality reports that public water managers are required to provide,” he says.

The Downside of Bottled Water

Ironically, Goldstein says, “Many bottled water companies take water from public supplies and put those waters into bottles—some with additional treatment, some not.” So, you may be spending your cash on the exact commodity your tap provides for free.  Another downside: “Questions have been raised about the safety of bottled water stored for long periods of time in plastic bottles, particularly if those bottles are stored in hot surroundings,” he says.

PET (polyethylene terephthalate), the plastic used in many water bottles, can leach carcinogenic chemicals into your water if it’s been exposed to high enough temperatures (i.e. left in a hot car). To learn about the negative impact bottled water has on the environment, see the sidebar, Bottled Water is a Major Polluter.

Bottled Water vs Tap Water: Which Should You Choose?

Bottled water, which millions believe to be pure, may not be as healthy as you thought. As mentioned in the WWF study, “Bottled water should not be considered a sustainable alternative to tap water, as it is not exempt from periodical contamination.” Bottled water can suffer from the same contamination risks as tap water but is not as highly regulated. The result: You may not know what you’re drinking.

Why Do People Choose Bottled Water vs Tap Water?

According to Christine Ferrier, the researcher commissioned to study the social phenomenon of tap water by the WWF, there are multiple reasons that people favor a swig of bottled water vs tap water. Here are a few:

Bottled Water vs Tap Water: Is One Better Regulated Than the Other?

Many believe that bottled water is more highly regulated than tap water. It looks clean in that shiny plastic bottle, after all. According to Goldstein, that’s not the case. The federal government requires more frequent testing of public water supplies than they do for bottled water providers, he says. “In addition, under federal law, all public water suppliers must provide their customers with annual water quality reports that detail the sources and testing results for the water they supply. That information is sometimes available and sometimes not from bottled water companies and is usually more difficult for consumers to obtain,” he says.

When to Choose Bottled Water

We now know the winner of the bottled water vs tap water debate (hint: it’s free and doesn’t come from a store). Despite tap water’s clear victory, there are going to be times when the bottled variety may be a good choice. When you’re gearing up for or recovering from a hurricane or other natural disaster, bottled water is a safe way to stay hydrated, for example. And those who live in towns with compromised tap water could benefit from a bottled brand.

BOTTLED WATER IS A MAJOR POLLUTER

Bottled water is responsible for damage that extends far beyond the thickness of our pocketbooks. This 22-billion-dollar industry uses 1.5 million tons of plastic each year.  According to a study in the journal Science, over “275 million metric tons (MT) of plastic waste was generated in 192 coastal countries in 2010, with 4.8 to 12.7 million MT entering the ocean.” Some of this waste can be blamed on the bottled water industry. There are also landfills to consider. Most plastic bottles end up here, releasing toxic chemicals as they very slowly decompose.

In addition to creating plastic waste, the manufacturing and disposal processes affiliated with bottled water can be blamed for releasing toxic chemicals into the environment. According to the World Wildlife Foundation, one quarter of the 89 billion liters of water produced annually are consumed outside their country of origin. That means we must factor in greenhouse gas emissions (i.e. carbon dioxide) which are a byproduct of transportation.

The good(ish) news: many bottled water companies are trying to become more environmentally conscious. Instead of relying on PVC to make their bottles, companies are choosing PET (polyethylene terephthalate), which is lighter, more transparent, requires less plastic to make a bottle, and is simpler to work with. PET is also easier to recycle into various products such as clothing fibers, egg boxes, and polyester carpets.