Home » Daily » Eyes, Ears, Nose & Throat » Frey’s Syndrome: What It Is and How It’s Treated 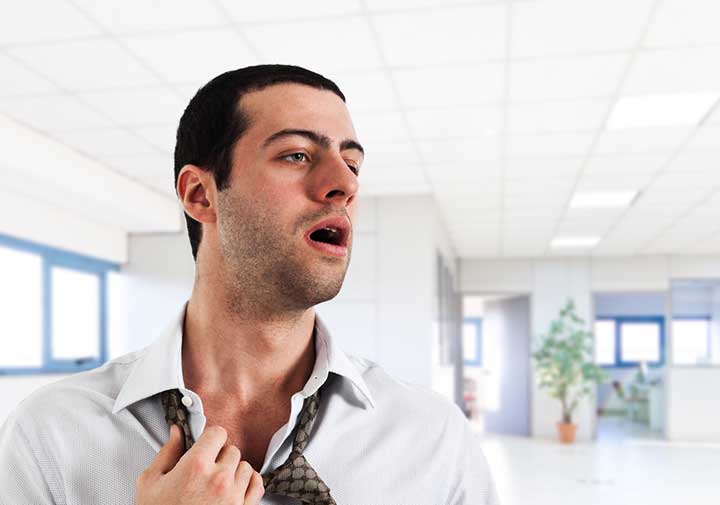 The majority of people with Frey’s Syndrome develop it as a result of surgery on or near the parotid gland.

A common side-effect of facial surgery on or near the parotid glands, Frey’s Syndrome causes sufferers to sweat profusely while eating certain foods (i.e. lemons). Instead of triggering the mouth to produce saliva, Frey’s Syndrome causes certain areas of the face to sweat when munching on these victuals. While most experience the sweating and flushing as a mere annoyance, others rate their symptoms as extreme. Until recently, treatment options for Frey’s Syndrome have been largely unsuccessful. Multiple studies of the effects of Botox on the condition, however, prove that a positive solution may have arrived.

What Is Frey’s Syndrome?

According to the National Organization for Rare Disorders (NORD), Frey’s Syndrome is “a rare disorder that most often occurs as a result of surgery in the area near the parotid glands.” Not sure what parotid glands are? Learn more about them in the sidebar: “What are parotid glands?”

The main symptoms of Frey’s Syndrome are more annoying than life-threatening. They include excessive sweating and flushing of the cheek, temporal region (i.e. near your temples), or behind the ears. This occurs after eating highly salty, sour, or spicy foods that produce a dramatic salivary reaction and may not be noticed for a year or even more following surgery.

The extent of a patient’s suffering, NORD claims, will depend upon risk factors such as: tumor size, the amount of parotid tissue removed during surgery, the size of the incision, and whether the patient had reconstruction post tumor removal. The good news: Frey’s Syndrome is often mild and only causes extreme discomfort in a few severe cases. Plus, as stated by the Genetic and Rare Diseases Information Center (GARD), “some reports indicate that symptoms of this condition can resolve on their own over time.”

THE MINOR IODINE-STARCH TEST
The most common way to test for Frey’s Syndrome is by a specialized test known as the Minor Iodine-Starch Test. Here’s how it works.

Step 1: An iodine solution is applied to the affected facial areas.
Step 2: A starch powder (i.e. corn starch) is applied over the iodine.
Step 3: The patient is then given a stimulatory food (i.e. a highly acidic lemon wedge).
Step 4: The results become clear—excessive sweating will cause the affected facial area to change color (usually to purple). This indicates a positive test for Frey’s Syndrome.

While no known cause has been definitively identified, researchers believe Frey’s Syndrome is a result of complications from surgery near the parotid glands. Their hypothesis is this: during surgery, the parasympathetic and sympathetic nerves near these glands are cut. While damaged nerve fibers usually heal themselves, in this case the nerves regenerate in an abnormal fashion, connecting to the sweat glands. As described by NORD, “The parasympathetic nerves that normally tell the parotid glands to produce saliva in response to tasting food now respond by instructing the sweat glands to produce sweat and the blood vessels to widen (dilate).” The result: extreme, unwanted sweating and flushing upon eating certain foods.

WHAT ARE PAROTID GLANDS?

Your salivary glands come in three sets of two. The submandibular, sublingual, and parotid glands. The parotid glands are located just in front of and slightly below each ear, behind the jaw bone. These are responsible for secreting saliva into the mouth.

Who Gets Frey’s Syndrome?

The majority of people with Frey’s Syndrome develop it as a result of surgery on or near the parotid gland. As stated by an article published on the Osborne Head & Neck Institute’s website, “All patients who have salivary gland surgery without reconstruction will have gustatory [a.k.a. excessive] sweating to some degree.”

According to NORD, between 30 to 50 percent of those who’ve had surgical removal of a parotid gland develop Frey’s Syndrome. Of those, they say 15 percent classify their condition as severe. Another possible cause of the disorder is blunt trauma to the side of the face on or near the parotid gland.

Treatments for Frey’s Syndrome are usually aimed at relieving symptoms, rather than curing the condition. While many of the current remedies (i.e. topical ointments, deodorants, and further surgery) have been disappointing, researchers have found an exciting possibility with virtually no downside—Botox.

According to a Thai study, injecting Botox into the affected area can suppress sweating and eliminate Frey’s Syndrome within a week. As the researchers stated, “intradermal injection of botulinum toxin type A for patients with Frey’s syndrome is not only effective with no side effect but also minimally invasive.” Since Botox isn’t a long-term solution, the treatment must be repeated if symptoms return.  To learn more about Botox and its effects, read our post What Is Botox?

SWEAT BY ANY OTHER NAME
Just because you’re excessively sweating doesn’t mean you have Frey’s Syndrome. Other disorders that have similar symptoms include: