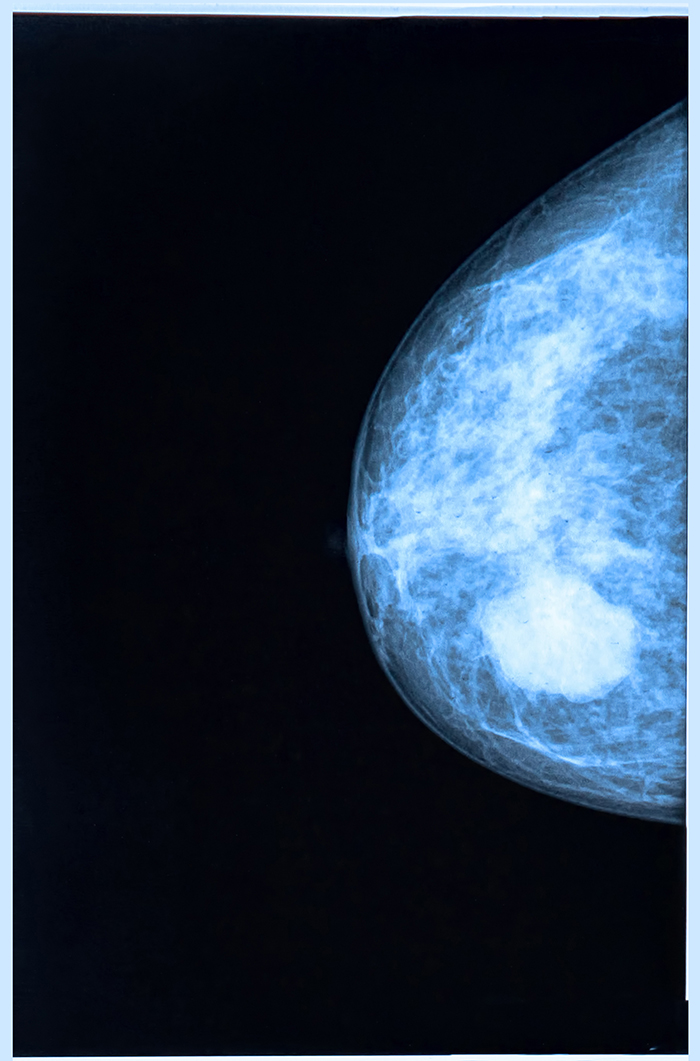 Teen girls who eat a diet high in saturated fat are at increased risk of developing dense breasts, according to a study conducted by the American Association for Cancer Research.

To a weight-conscious woman, fat isn’t a good thing. But when it comes to finding breast cancer, fat may be your friend. That’s because having more fatty tissue in the breast makes it easier to identify breast cancer on a mammogram. Conversely, having more dense breast tissue makes this task more challenging.

However, recent research suggests that adding a newer, high-tech form of imaging to standard digital mammography may increase breast cancer detection and reduce the need for follow-up testing, even in women with greater breast density.

Breasts consist of small glandular lobes, or lobules, that produce milk, tiny tubular ducts that carry milk from the lobules to the nipple, and fatty or fibrous connective tissues that give the breasts their definition. About 80 percent of breast cancers are ductal carcinomas, which originate in the cells of the ducts, while another 10 percent form in the lobules, according to the American Cancer Society (ACS).

Women with dense breast tissue have much more fibrous or glandular tissue and much less fat in their breasts. In most women, breast density decreases with age, but in some it changes very little. Some research suggests that women with greater breast density may face a slightly higher risk of developing breast cancer, although the reasons for this increased risk are unclear.

The only way to gauge breast density is on a mammogram; the amount of dense breast tissue you have is not related to the size, shape, or feel of a breast. Breast tumors look white on a mammogram, while fatty tissue appears almost black. Dense breast tissue also appears white on mammography, making it more difficult to pinpoint tumors, especially small ones, in and around the dense tissue.

As breast density increases, spotting breast tumors on a mammogram becomes more challenging, potentially limiting the effectiveness of breast cancer screening. But even in women with dense breasts, most breast tumors can still be seen on a mammogram, so it’s still important to undergo periodic mammograms, the ACS notes. The latest guidance from the U.S. Preventative Services Task Force, dated January 12, 2016, shows there are benefits but also risks associated with screening. “Women who have a mother, sister or daughter with breast cancer may benefit more than average women by beginning screening in their 40s,” according to the task force.

In an effort to improve breast cancer detection, researchers have examined other imaging modalities, such as breast tomosynthesis (3-D mammography). This technique not only provides the two-dimensional X-ray images of a conventional digital mammogram, but also combines them into an enhanced three-dimensional image of the breast, with the help of computer technology.

In a study published April 26 in JAMA, researchers reviewed data on 452,320 breast examinations and compared cancer detection rates between digital mammography alone and digital mammography combined with tomosynthesis in women with varying levels of breast density. The investigators reported that, compared to mammography alone, the combination of mammography and tomosynthesis led to an increase in the rate of detecting invasive breast cancer and a reduction in the recall rate (the percentage of mammograms with suspicious findings that require patients to return for follow-up testing) in both dense and non-dense breasts.

The benefits of the combination screening were greatest in women with heterogeneously dense breasts (mostly dense tissue but some areas of non-dense tissue), who comprise the majority of women with dense breasts, the study authors noted. However, the researchers reported no significant differences between the imaging techniques in women who had extremely dense breasts.

Breast Density and You

The study authors noted that 24 states have laws requiring that women be informed about breast density. When you undergo a mammogram, ask your doctor if the test shows dense breast tissue. If it does, review your overall risk of breast cancer and discuss whether you might need additional testing, such as tomosynthesis, whole-breast ultrasound, or magnetic resonance imaging.

Most important, discuss breast cancer screening and early detection with your physician, and adhere to the screening regimen that he or she recommends. And, tell your doctor about any signs of breast cancer, such as a hard lump or mass in the breast, breast or nipple pain, breast swelling, abnormal nipple discharge, an inverted nipple, or irritation, dimpling, redness, or thickening of the breast skin or nipple.