You will need to see a doctor when your ear wax is beginning to cause symptoms like dizziness, decreased hearing, and a ringing or popping noise.

According to a review in the medical journal American Family Physician, the medical term for earwax is cerumen, and it serves an important function. Earwax keeps the thin layer of skin in your ear canal clean, moist, and protected from germs. Earwax is a combination of wax secreted by cerumen glands in your ear canal and old skin cells. Earwax naturally moves out of your ear canals all the time. If something interferes with the normal movement of earwax, it can accumulate into a blockage called an impaction.

Why Do I Have So Much Earwax?

Earwax is not a problem unless you have impacted earwax that causes symptoms. Some people make more earwax than others, but there is nothing you can do about that. It may be something that is passed down in your genes. In any case, if you have an earwax impaction, the cause is almost always the failure to move wax out of the ear canal, not making too much wax.

These are some common reasons why you might have impacted earwax:

What to Do for Wax Impaction 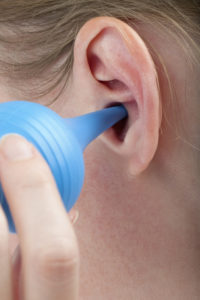 An impacted ear canal is more likely to get infected, called external otitis. If you have external otitis your ear canal can become red, swollen, and very painful. If you do not have symptoms of external otitis you can try an over-the-counter ear drop. These drops soften the wax and may include a bulb syringe to flush out the softened wax.

Do not use drops or flush out your ear if you have a perforated eardrum or a history of middle ear surgery. If you use the bulb syringe, make sure the water is at body temperature. Cold water flushed into your ear can cause dizziness. If the OTC treatment does not work or you don’t want to try it, see your primary care doctor.

Your primary care doctor can look in your ear canal with a lighted scope, called an otoscope. If a wax impaction is the cause of your symptoms, and you do not have any history of a perforated ear drum, or ear surgery, your doctor may use a wax softening ear drop like mineral oil or hydrogen peroxide to soften the wax. When the wax is soft, a special wax removal syringe may flush out the wax. In some cases, the wax can be flushed out without the drops. After this treatment, your doctor may place some acidic or alcohol drops into your ear to reduce the risk of an ear infection.

Sometimes a very large and hard impaction, or an impaction in a crooked or narrowed ear canal, cannot be removed by a primary care doctor. You may need to see an ear, nose, throat specialist. This doctor is trained to use special wax removal instruments in the ear canal and may do this while looking through a microscope.

When to Call Your Doctor

Do not try to remove wax with a cotton-tip swab, olive oil, or ear candle. These ways of removing wax are not effective and can cause an injury or infection. Call your doctor if: