COPD stands for chronic obstructive pulmonary disease. The COPD definition is a lung disease that?s caused by exposure to harmful particles or gases, which limits the flow of air into the lungs and affects a person?s ability to breathe normally. The lung damage and symptoms usually get worse over time.

The COPD definition encompasses not one, but two different conditions: emphysema and chronic bronchitis. Emphysema involves damage to the air sacs in the lungs. Chronic bronchitis is inflammation of the bronchial tubes through which air reaches the lungs.

In a normal lung, air travels from the mouth and throat through a branching network of bronchial tubes that extend into thinner and smaller tubes called bronchioles. At the end of these tubes are air sacs called alveoli, through which oxygen is absorbed into the bloodstream and travels to the rest of the body. Also in the alveoli, carbon dioxide is removed from the blood to be exhaled from the body. The bronchioles and alveoli are normally very elastic, stretching wide and then returning to their normal size as you breathe in and out.

COPD is caused by long-term exposure to cigarette smoke, chemicals or fumes at work, air pollution, or other irritants. Over time, exposure to these toxic substances damages the airways and makes them less elastic. The walls between the air sacs are destroyed, making it difficult for the alveoli to properly inflate and deflate. As a result, too little oxygen gets into the blood and too little carbon dioxide is removed. Bronchitis produces an excess of mucus, which clogs the lungs and increases breathing difficulty.

Although COPD damages the lungs specifically, it can have body-wide effects. People with COPD are at greater risk for lung cancer, high blood pressure, heart disease, and respiratory infections. Treatment can reduce the odds of developing these complications. 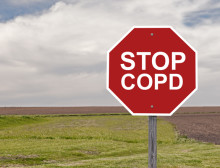 What Does COPD Stand For?

When former First Lady Barbara Bush died at 92 on April 17, 2018, reports circulated that she suffered from COPD. But what exactly is the ailment, and what does COPD stand for? Chronic obstructive pulmonary disease is a debilitating respiratory condition for which there isn't a cure. It results in … Read More