Weighted Blanket for Anxiety: The Latest Tool to Relieve Worry

Anxiety is a big problem in today’s world—one that’s been made worse by our increasing reliance upon technology and addiction to social media. In fact, about 40 million of us suffer from the disorder, says the Anxiety and Depression Association of America. Don’t worry! There’s good news, too. Anxiety is … Read More 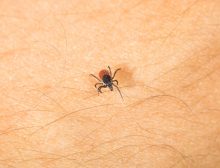 Ehrlichiosis: Another Tick-Borne Disease on the Rise

What is ehrlichiosis? It's a bacterial disease of the white blood cells. Spread by ticks, ehrlichiosis affects all mammals, including people. Two bacteria in particular are known to cause the disease—Ehrlichia chaffeensis and Ehrlichia ewingii. A third, Ehrlichia muris, is being evaluated as another cause. According to the U.S. National … Read More

Why Is Gluten Bad for You? Gluten Side Effects Include Risk of Dementia

Think that morning bagel or pasta dinner is no big deal? Think again. Wheat contains gluten, which may be dangerous even to those that don't have Celiac disease or a gluten sensitivity. But why is gluten bad for you? Studies show eating gluten can cause brain disorders that could ultimately … Read More

Doctors Near Me: How to Find Integrative Physicians

You've likely heard—or asked—this question more than once: "How do I find good doctors near me?" Locating a physician close to your home can be a daunting task, especially if you're looking for one who will support increasingly popular "natural medicine" practices: Limited pharmaceuticals Treating the root cause 'Finding a … Read More

Anaplasmosis: Tick-Borne Disease Is Gearing Up and On the Rise

Ticks are nasty bugs that transmit a number of diseases, among them anaplasmosis. What is anaplasmosis? It's caused by the bacteria Anaplasma phagocytophilum, which the tick shares when it bites a host. Anaplasmosis is the second-most common tick disease, after Lyme disease. While the incidence of Lyme disease dwarfs that … Read More

What Is Functional Medicine, Who Does It, and Why Does It Work So Well?

What is functional medicine? It involves a whole new way of understanding, assessing, preventing, and treating chronic disease. It integrates a variety of science-based approaches to find and treat underlying imbalances in how the body’s systems are functioning. Practitioners focus on what’s unique about a patient and try to understand … Read More

Speech Therapy: What Is It and How Can You Do It at Home?

Nearly 7.5 million Americans have difficulty using their voices, claims the National Institute on Deafness and Other Communication Disorders. Whether they were born with a condition that makes it hard to verbalize (i.e. autism) or developed speech difficulties following an accident or stroke (i.e. aphasia), these people have one major … Read More

More and more autism researchers are concluding that autism may result from a combination of genetic susceptibility and exposure to environmental toxins, such as heavy metals, at critical periods during brain development. As we saw in part 1, there is growing evidence that detoxification systems are impaired in autistic children and … Read More

Scientists are increasingly interested in the relationship between our body’s natural bacterial flora living in our gut—or “microbiome”—and medical conditions that range from inflammatory bowel disease and heart disease to autism and depression. The microbiome appears to play a greater role in health and disease than previously recognized. Probiotics, defined … Read More