Home » Daily » Stress & Anxiety » Anxiety Symptoms in Women: What Causes Them, and How to Cope 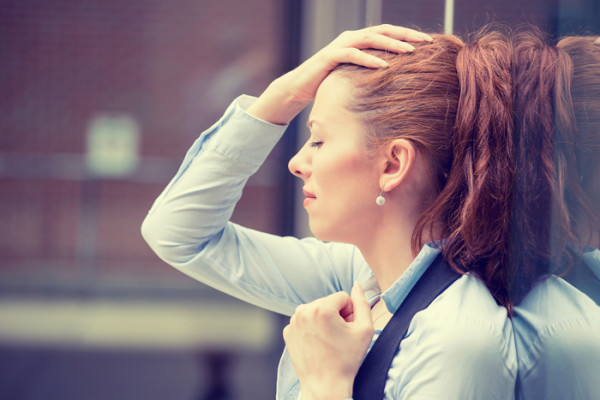 The body’s stress response, the one that prepares us to “fight or flight” in the face of an imminent danger—encountering a wild animal or a mugger, for example—is activated more readily in women than men and lasts longer. This may help explain why anxiety symptoms in women are twice as likely to occur than anxiety symptoms in men. But this is just a theory.

Research has also shown that the female brain does not process the brain chemical serotonin as quickly as the male brain. Serotonin plays a major role in how the body responds to stress and anxiety.

Finally, research also suggests that women’s brains may be more susceptible to the hormone corticotropin-releasing factor (CRF). This hormone plays an important role in the regulation of the stress response.

Another theory is that the female sex hormones progesterone and estrogen play a role in anxiety in women. Anyone who has suffered from premenstrual syndrome (PMS) knows that changes in female sex hormones can make you feel shaky and more vulnerable to stress.

Further thinking that female sex hormones may play a role in anxiety is evidence that anxiety disorders often manifest or worsen during pregnancy or during the first few weeks after having a baby. Some women also experience anxiety associated with menopause.

Contributing to the hormone hypothesis is the fact that supplementation with the male hormone testosterone can sometimes have anti-anxiety effects. Men, therefore, may be somewhat protected from anxiety disorders by their natural tendency to have higher levels of testosterone in their systems.

What Are Anxiety Symptoms in Women? 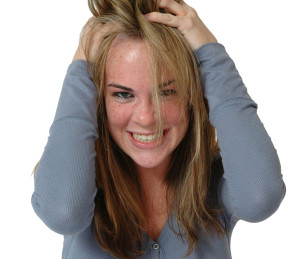 Feeling “on edge” is one of the symptoms that turns up among women who experience anxiety.

There are countless ways to ease your anxiety. As noted in this post by Jami Cooley, doctors may prescribe antidepressants such as Prozac and Lexapro. Just be aware that they won’t necessarily be effective and could cause side effects. (Click here to read “Anxiety Medication and Antidepressants: Do They Make a Difference?” See also our post “Over-the-Counter Anxiety Medication: Does It Work?“)

A number of natural means may help:

There is some evidence that women are more likely to suffer from physical symptoms of anxiety than men. So, an anxious woman might go to her doctor complaining of chest pain, heart palpitations, stomachaches or nausea, muscle tension or pain, headaches, fatigue, sleep problems, or other physical symptoms.

Because of this, it can take some time before the anxiety is diagnosed. It is particularly important for women suffering from these symptoms to see their doctor, as there is evidence that women who suffer from physical symptoms of anxiety may be more vulnerable to heart disease.

In addition, a woman suffering from anxiety attack symptoms is also likely to have at least some of the mental or cognitive symptoms typically associated with anxiety, including excessive fear or worry that is difficult to control, obsessive thoughts, irritability, difficulty concentrating, and restlessness or feeling “on edge.”