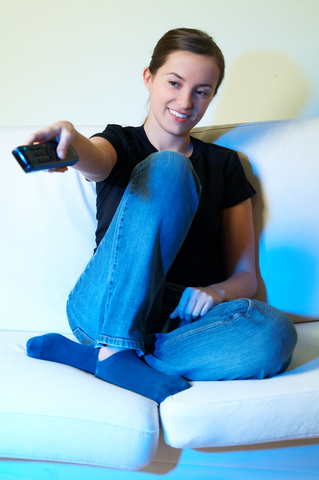 You may look silly sitting in your living room at night wearing orange-colored glasses, but a growing number of people are willing to put up with the teasing that these blue light blocking glasses are likely to provoke. The trend seems likely to expand as  evidence for the dangers of nighttime use of computers, tablets, smart phones, and other blue light-emitting electronics mounts.

Light at Night Harms Your Health

It’s been known for some time that light at night is bad for your health. It throws your body’s biological clock—your circadian rhythm—out of whack. Not only does your sleep suffer, researchers report, but an out-of-phase circadian rhythm contributes to obesity, diabetes, depression, heart disease, stroke, and cancer.[1]

“Maintaining synchronized circadian rhythms is important to health and well-being,” says Dieter Kunz, MD, an expert researcher in sleep and circadian rhythms. “I’m pretty sure that at least many of the sleep disorders we are facing epidemically are related to evening or nighttime light,” he says.[2]

While even dim light interferes with circadian rhythms, research shows that exposure to short-wavelength “blue” light emitted by electronics is especially detrimental.[3] The backlights of tablets, laptops, smart phones, and computer screens are based on light-emitting diodes (LEDs) rich in blue light.[5]

Blue light is a more powerful suppressor of melatonin than other wavelengths.[2] Melatonin is an important hormone that influences circadian rhythms, signaling that it’s time to sleep. While all light suppresses melatonin secretion, certain cells in the eye that provide information to the brain’s master clock are uniquely sensitive to blue light.[2]

Numerous studies have now found that exposure to light from these devices at night is sufficient to shift the circadian clock and suppress melatonin.[5-7] Exposing yourself to blue light emitting devices at night has multiple effects:

Sleep researchers such as Dr. Anne-Marie Chang of Harvard Medical School state that using a light-emitting device in the hours before bedtime is likely to increase the risk sleep disorders and lead to chronic sleep deficiency.[5]

But melatonin suppression over the long term has far worse consequences than simply those related to poor sleep. As mentioned above, it has also been shown to increase the risk of cancer, obesity, heart disease, stroke, diabetes, and depression. These more serious consequences should prompt anyone working on adopting a healthy lifestyle to take steps to reduce blue light exposure at night.

If you can’t (or don’t want to) avoid looking at bright screens beginning two to three hours before bed, one way you can protect yourself is by wearing eyewear that blocks blue light. Blue light blocking glasses have been shown in numerous studies to significantly reduce the melatonin-suppressing effects of blue light.[6,8-10]

Blue blocking glasses virtually eliminate the short-wavelength radiation linked to melatonin suppression and using them is an extremely effective way to reduce the harmful effects of electronic screen exposure. The blue light blocking glasses provide the additional benefit of blocking the melatonin-suppressing blue light that is also emitted by today’s energy-efficient fluorescent lightbulbs and LED lights.

What You Can Do

You can purchase the amber-lensed glasses easily online from places like Amazon. A cheap and very popular option for late-night computer users is Amazon’s Uvex Skyper Safety Eyewear. These blue blocking glasses are available for about $9.

It may not seem like a big deal to check email, watch a video, or respond to a text message close to bedtime, but spending too much time in front of a screen before bed causes significant and potentially harmful sleep disruption and melatonin suppression.

Using blue light blocking glasses is an easy way to help yourself get adequate, high-quality sleep—one of the most important steps you can take to improve your overall health.