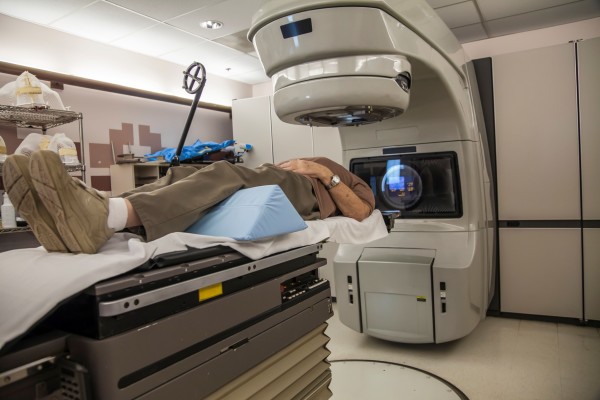 External beam radiation (EBT) precisely targets tumors within the prostate gland. While there can be side effects, EBT avoids the potential nerve involvement and resulting erectile dysfunction associated with radical prostatectomy.

Radiation treatment for prostate cancer involves using high-energy beams such as x-rays to kill cancer cells and prevent them from spreading. Treatment with radiation, called radiation therapy, may be used for two different purposes: to treat and hopefully cure the cancer or to reduce symptoms from what has been determined to be incurable cancer.

There are two main categories of radiation therapy (RT): external and internal. External RT is the most common form of RT used and involves directing energy beams towards the prostate from a machine outside the body. Internal RT involves the placement of radioactive materials inside the prostate itself.

External Radiation Therapy: What are the Options?

For much of the past, external radiation therapy was available in primarily one form:
External Beam Therapy (EBT). During EBT, a machine called a linear accelerator (linac) delivers high energy beams of radiation towards the targeted place on the body, called the treatment field. The treatment field is identified before EBT is started by using imaging such as magnetic resonance imaging (MRI) or computed tomography (CT) to identify the precise location of the prostate tumor. EBT is usually administered during brief sessions five days a week over the course of five to eight weeks.

More recently, newer methods of delivering external radiation have become available, allowing for better localization of radiation towards the prostate while sparing the surrounding normal or healthy tissue, including bladder and rectum.

Internal Radiation: What are the Options?

What are the Potential Side Effects from Radiation Therapy?

Early side effects from external radiation therapy include skin irritation over the treatment field and generalized fatigue, both of which usually resolve. Internal radiation may result in temporary pain or tenderness over the needle or tube insertion sites. Internal and external RT can also cause many of the same side effects.

The degree to which the side effects are experienced may vary, depending on how precisely the radiation can be delivered to the tumor and how much of the radiation is absorbed by tissues surrounding the prostate. If you experience side effects that do not resolve, your doctor may be able to offer you treatment options to minimize your symptoms. The predominant side effects include: