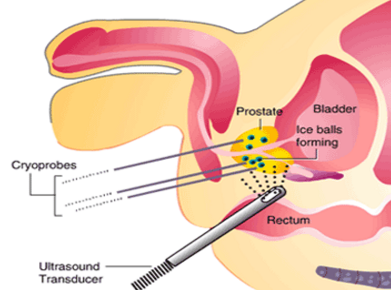 Cryoablation or cryosurgery is also known as "focal therapy." The procedure involves inserting probes into the prostate gland guided by trans-rectal ultrasound. Argon gas is pumped through the probes, freezing cancer cells and the cancer's blood supply. Surrounding tissue is spared through a warming probe.

Cryoablation, also called cryotherapy or cryosurgery, is a relatively new treatment option for prostate cancer. Although the original technique was developed in the 1960s and has been modified over time, widespread use of cryoablation for prostate cancer did not occur until the U.S. Food and Drug Administration approved its use in the early 1990s.

Cryoablation utilizes a freezing technique to focally kill prostate cancer cells. This is accomplished by delivering Argon gas to the cancer tissue using small needles inserted through the skin into the prostate.

Who Would Be a Good Candidate for Cryoablation?

Cryoablation is typically only recommended for men with early-stage or localized prostate cancer (T1-T3 cancer) because it is only effective in treating focal areas of disease. However, it may also be used in men who did not respond to radiation therapy (RT), men who are not healthy enough to undergo surgery or RT because of other medical conditions or age, or in men whose disease is considered incurable but need symptomatic relief from tumor in their prostate. It is not recommended for men with very large prostates.

How Does It Treat Prostate Cancer?

Cryoablation involves subjecting the targeted prostate tissue to -40 degrees Celsius through the use of Argon gas. This freezing achieves prostate cell death by a number of mechanisms including direct cellular toxicity, formation of intracellular ice that disrupts cellular metabolism, induction of programmed cell death (apoptosis), and damage to the cells of small blood vessels (called capillaries) that feed the tumor. The dead tissue that results is subsequently absorbed by the body.

How Is It Performed?

Cryoablation is performed by inserting small needles or “cryoprobes” into the prostate via the perineum (the area between the scrotum and anus) and delivering the Argon gas through them. The doctor will use either transrectal ultrasound (TRUS) or magnetic resonance imaging (MRI) guidance to both determine the precise positioning of the needles and to monitor the freezing process.

Part of the success of cryoablation depends on the rapid rate of temperature decline which is monitored by probes placed in surrounding tissue. Any cells, not just cancer cells, can be killed by these temperatures so doctors take special care to keep certain nearby structures warm.

A warming device is inserted into the urethra and special warming needles are inserted in the tissue between the prostate and rectum to preserve the rectal wall. The prostate tissue is typically rapidly frozen by the Argon gas and then allowed to slowly thaw, either passively or through active warming with Helium gas delivered through the same needles. This freezing/thawing cycle is performed two consecutive times and the total procedure usually takes less than two hours.

Some patients may receive general anesthesia but many receive epidural anesthesia to numb the lower half of their body. Depending on a patient’s overall health, the doctor’s preferences, and whether or not there were any intra-procedural complications, the patient may be able to have the procedure performed on an outpatient basis. Whether he is able to go home or must stay in the hospital, the patient will have to keep a urinary catheter in place for several weeks to maintain the patency of the urethra and avoid obstruction of urine flow by any dead prostate tissue that may slough off.

What Are the Side Effects of Cryoablation?

Cryoablation has fewer risks than more invasive types of surgery in terms of bleeding, infection, and the risk of blood clots, but can be associated with side effects. The most common significant side effect is erectile dysfunction (ED), which occurs more often in men undergoing cryoablation than in men undergoing radical prostatectomy surgery. ED results from damage to the nerves involved in achieving an erection.

Medications such as phosphodiesterase-5 (PDE-5) inhibitors may help treat ED in some men. Additionally, recent research has demonstrated that men who were potent prior to cryoablation but suffered from ED after the procedure were able to regain erectile function through “penile rehabilitation” utilizing penile vacuum pumps.

Some patients experience issues related to urinary incontinence or urinary obstruction, but these are temporary in the majority of patients. Older techniques could result in a rectal fistula (abnormal opening that forms from tissue damage) between the rectum and bladder, but this now occurs in less than 1 percent of men thanks to technical advances.

Because cryoablation is a relatively new treatment, there is a paucity of data on the long-term efficacy of its use in prostate cancer. Some studies have shown that 87 to 98 percent of patients who received cryoablation had negative biopsies at 6 and 12 months post-procedure. Other studies using prostate specific antigen (PSA) levels of 0.5 nanograms per milliliter (ng/ml) as a marker of cancer reoccurrence demonstrated that 61 percent of patients identified as having a low-risk of cancer progression, 68 percent with medium-risk, and 61 percent with high risk had PSAs less than 0.5 ng/ml at the end of 5 years.

Clinical trials at a number of institutions are currently underway to help better determine the role of cryoablation in the long-term effectiveness of prostate cancer.