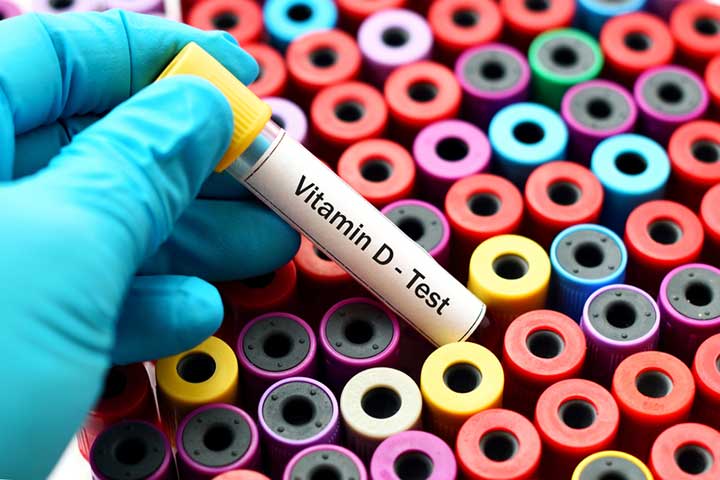 While the debate rages on among experts as to what blood vitamin D levels constitutes “normal," most would agree that levels of 10 ng/mL or lower suggest a real deficiency.

We know we need vitamin D: It contributes to healthy muscles and bones and also plays a role in our mental well-being. In fact, new research from The Irish Longitudinal Study on Aging (TILDA) at Trinity associates vitamin D deficiency with a substantially increased risk of depression—more than 75 percent—over a four-year follow-up period. Published in The Journal of Post-Acute and Long-Term Medicine, the results are important, the authors note, “given the high prevalence of vitamin D deficiency among older people [and] the fact that supplementation has a low risk of toxicity or side effects.” So, how do we know our vitamin D level is normal?

The 25-hyroxyvitamin D blood test—often referred to as the 25(OH)D test—is the most accurate way to assess the amount of vitamin D in your body. It’s usually measured in nanograms per milliliter, or ng/mL. But again, what’s the right vitamin D level, according to research? This is where things get problematic.

Vitamin D deficiency symptoms have been linked to numerous health problems, including heart disease, depression, and even cancer.[1] Here are 10 signs you’re not getting enough vitamin D:

Other symptoms of vitamin D deficiency include exhaustion and decreased endurance; impaired wound healing (click here); and spasms in the muscles of the hands and feet.

These are the most common causes of vitamin D deficiency symptoms:

Vitamin D deficiency symptoms in women and men, if left untreated, can lead to serious health problems, including:

There is no universal agreement on what constitutes an ideal vitamin D level, and studies are contradictory. In 2007, Michael F. Holick, M.D., Ph.D. published an article in The New England Journal of Medicine stating that vitamin D levels ranging between 21 to 29 ng/mL were linked to an increased risk of various diseases, including cancer, diabetes, and depression, among others. Thus, he opined that the “normal” values at that time should be lowered to below 21.

Then, in 2010, the United States and Canadian governments asked the Institute of Medicine (IOM) to assess data on health outcomes associated with calcium and vitamin D. Their conclusion was a vitamin D level of 20 ng/ML or higher was “normal” and a vitamin D deficiency occurred only in levels below 20 ng/ML.

To make things even more confusing, in 2011 The Journal of Clinical Endocrinology & Metabolism published a study that suggested vitamin D levels of 30 ng/mL were considered “normal”—but to guarantee an optimal level, 40 to 60 ng/mL was recommended in adults and children.

While the debate rages on among experts as to what blood vitamin D levels constitute “normal,” most would agree that levels of 10 ng/mL or lower suggest a real deficiency, and that people in high-risk groups should have a level above 20 to 30 ng/mL (including perimenopausal, pregnant, or lactating women as well as people with any type of bone disease). However, integrative doctors and naturopaths say “normal” levels should be as high as 50 to 70 ng/mL.

The conclusion? While some experts suggest a level above 20 would be adequate, all agree that vitamin D levels could reach 60 to 100 ng/mL without posing any safety risk. So while there is no “standard” level, taking into consideration all opinions would result in the following vitamin D level recommendations:

It is important to make sure that levels do not go above 100 ng/mL.

You’re likely aware of the huge surge in research showing that vitamin D plays a crucial role in a plethora of physiological and preventive functions. Not only does it regulate calcium and phosphate levels, as we thought, but vitamin D also has numerous extra-skeletal effects.

Acting as a hormone, vitamin D can have a significant impact on the cardiovascular system, central nervous system, endocrine system, and immune system.[4] Vitamin D receptors have now been found in most body cells. It is believed that when vitamin D binds to these receptors, it regulates a very large number of genes in the human genome.[5]

While more research is needed, many vitamin D researchers and physicians, including Boston University’s Dr. Michael Holick, PhD, MD, one of the one of the world’s most prominent vitamin D researchers, disagree with the JAMA author’s stance on staying with low-dose vitamin D. Instead, they support the idea of increasing vitamin D levels through high-dose supplementation.[12]

How to Get Tested for Vitamin D Deficiency

If your goal is to prevent these common conditions, achieve optimum health, or age more gracefully, you’ll want to regularly test your vitamin D levels and adjust your dose accordingly. Blood testing for 25(OH)D is only way to know whether you’re getting enough—or too much—vitamin D. March or April (the end of winter) is an excellent time of the year to test.

You have three options for a vitamin D deficiency test:Ask your doctor to order it.

Make sure the test is the correct one: Even some doctors mistakenly order a 1,25(OH)₂D test instead of the correct 25(OH)D test.

What should you do if you’re vitamin D deficient?

First, you need to know that vitamin D is available in two different forms—D3 (cholecalciferol) and D2 (ergocalciferol). Vitamin D3 is the form of vitamin D that can be obtained via sunlight or exposure to a light therapy box. It’s also the form you’ll find in over-the-counter supplements. Vitamin D2, on the other hand, is the type of vitamin D most frequently prescribed by physicians.

A study published in The American Journal of Clinical Nutrition examined which type of vitamin D worked best to raise serum 25-hyroxyvitamin D levels. The results indicated that vitamin D3 was more effective, and was “the preferred choice for supplementation.”

Adults can take vitamin D3 supplements at levels between 1,000 IU and 5,000 IU per day. Generally, a dose of 3,000 to 5,000 IUs per day is required to maintain levels between 30 to 50 ng/mL. It is not recommended that you take more than 5,000 IUs per day unless under the direct supervision of a doctor. And, children should not take vitamin D supplements without consulting a family doctor or pediatrician.

After supplementing for 30 days, be sure to re-test your vitamin D levels and then adjust your daily intake of vitamin D accordingly.

You can learn more about vitamin D deficiency symptoms and the best vitamin D sources by clicking here to access our free guide.

Looking for worthy foods to give you the vitamin D your body needs? Consider adding both fish and mushrooms to your diet (see below for more information). Other foods that naturally contain vitamin D are egg yolks, organ meats (offal), and high-fat dairy.

Recent studies indicate that cooking may sometimes significantly lower vitamin D content. Canning and freezing fish does not alter its vitamin D much, nor does baking.[5] Frying salmon, on the other hand, was found in one study to decrease the vitamin D by about 50 percent. The canned versions of oily fish like salmon, sardines, and mackerel can be a simple, relatively inexpensive way to get your vitamin D plus the extremely important omega-3 fatty acids EPA and DHA.

Because of the incredible variability among foods, you can’t always depend on printed information to provide the correct vitamin D content. There is currently a renewed effort among nutrition researchers to re-measure and update this information. Nevertheless, you can use the list below, which comes from the USDA Nutrient Database and other published scientific sources, as a general guideline.[

While few foods naturally contain vitamin D, fish is the major exception. The exact amount of vitamin D in fish varies greatly depending on the kind of fish, whether it’s wild or farmed, its diet, how it was prepared, and many other factors that researchers are still discovering. Salmon, especially wild salmon, tends to have the highest vitamin D content—sometimes as much as 1,500 IU per 3.5 oz serving.[1] Sardines and mackerel are typically high in vitamin D as well.

Mushrooms are a fascinating, complex, and somewhat controversial natural food source of vitamin D. They are low in calories, carbohydrates, and fat, and provide important nutrients, including vitamin D, selenium, potassium, riboflavin, niacin, protein, and fiber.

Mushrooms form vitamin D when exposed to either natural sunlight or artificial UV light.  Wild, foraged mushrooms—both fresh and dried—are typically very high in vitamin D, whereas commercially produced mushrooms, which are grown in the dark, are not, unless they have been purposely exposed to light. Many large-scale mushroom producers in the United States are now taking these measures so that many of the mushrooms on supermarket shelves contain appreciable amounts of vitamin D.