Home » Daily » Nutrition » What Is Dioxin—and How Can We Prevent Dioxin Toxicity? 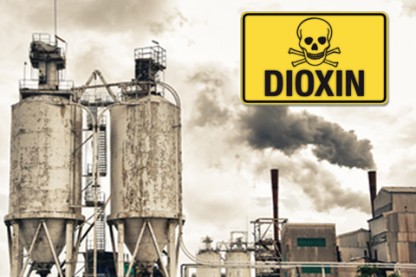 What is dioxin? It’s a toxic chemical that’s likely lodged in our cells at this very moment. But before you panic, know you can prevent dioxin toxicity.

You may have heard the term without realizing its impact, so let’s start by answering the obvious question: what is dioxin?

Dioxin is a hormone-disrupting, cancer- and diabetes-causing toxic chemical now found in humans all over the world. Dioxin is formed during many industrial processes when chlorine or bromine is burned in the presence of carbon and oxygen. Dioxin and dioxin-like compounds (like PCBs) are part of a group of chemicals classified as persistent organic pollutants (POPs). POPs are major environmental contaminants and pollutants that resist degradation and therefore persist in the environmental and build up in the food chain.

How Are Humans Exposed to Dioxins?

Dioxins are the unintended byproducts of a variety of industrial processes including waste incineration, metal smelting, chlorine paper bleaching, and pesticide manufacturing. Dioxin and dioxin-like compounds are now ubiquitous in soils, sediments, air, and water and are found even in very remote locations, such as Antarctica. While many Americans believe that dioxin pollution is no longer actively occurring, the truth is that dioxin contamination continues to be widespread; this includes contamination in the U.S. where release of dioxins increased by 18 percent between 2009 and 2010, according to a recent inventory.

All Americans have dioxins stored in their bodies. This is mostly due to our contaminated food supply. Dioxins build up in the food chain by accumulating in the tissues of animals, especially in fat. Meat, fish, milk, eggs, butter and other foods Americans eat daily all contain dioxins. The Environmental Working Group concluded in 2010 that the general public can be exposed to up to 1,200 times more dioxin than EPA scientists have considered safe for cancer risk.

Scientists are particularly concerned about the fact that human breast milk contains dioxins in amounts similar to highly contaminated foods such as beef, cheese and fish. This means newborns exposure to dioxins is much greater than that of children and adults. The Environmental Working Group found that the amount of dioxin a nursing infant consumes daily is up to 77 times higher than the level EPA has proposed to protect the endocrine and immune systems from dioxin toxicity. As you will see below, adverse impacts of dioxins on children’s health are of great concern.

What Is Dioxin Toxicity? The Frightening Health Consequences

Because dioxins accumulate in the food chain, they can have serious effects on human health. At excessively high levels and/or over extended periods of time, dioxins can impair fertility and child development, attack the immune system and the nervous system, and cause cancer.

Early-life exposure has been linked to neurological alterations, including effects on hearing, psychomotor function, cognition, and gender-specific behaviors; effects on the reproductive organs; and hormonal changes. In men, exposure to low levels of dioxin in the womb and early in life can decrease sperm quality and lower the sperm count during the prime reproductive years.

How to Avoid Dioxin Toxicity

Although exposure is almost impossible to avoid, we can prevent dioxin toxicity by avoiding these high exposure foods and by making sure our natural detoxification systems are working effectively. Rather than fretting over things you cannot control, concentrate on the things you can!

The World Health Organization (WHO) gives us this list of key facts on dioxin:

For more, visit the WHO page on dioxin by clicking here.