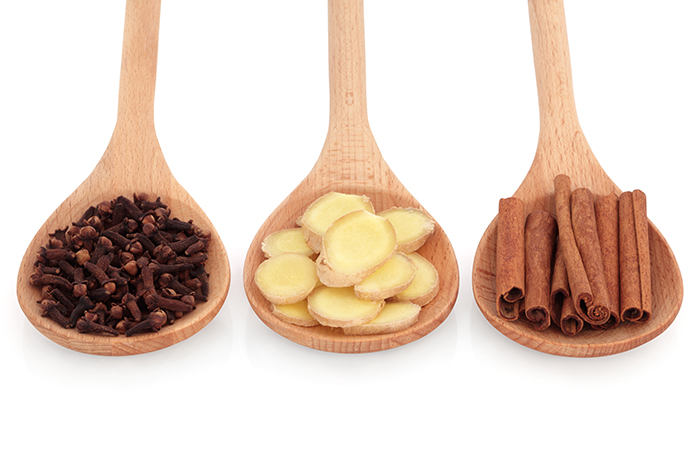 Ginger is also known for improving the appearance of one's complexion and hair.

Spices like ginger, cinnamon, clove, and allspice add the characteristic flavor to many winter dishes and holiday favorites. But they don’t just benefit the taste of your food; they also offer a wide array of health benefits.

Ginger’s health-promoting qualities are due to compounds found in the root, including gingerol, shogoal, and various polyphenols. Ginger is a well-known, proven home remedy for nausea and indigestion,[1] but its healing properties don’t stop there. It can help to protect against carcinogens and cancer, [2,3] has anti-tumor properties, and helps prevent metastasis. It’s also a strong antioxidant and anti-inflammatory;[3] it may help lower blood sugar;[3] and it can lower blood pressure.[4]

How to use it: Look for organic ginger root as the freshest source of this healthy spice. Use grated or chopped ginger in sauces, stir fries, stews, or curries for an added zing. Steep pieces of ginger in boiling water to create a soothing tea for an upset stomach. Ground ginger can also be purchased in the spice aisle at the grocery store, which is great for adding to baked goods, such as pumpkin pie or muffins. If you don’t love the taste of ginger but still want the health benefits, take a high quality ginger supplement (usually 250 mg 3 to 4 times daily).

THE MEMORY BOOSTER IN YOUR KITCHEN CABINET

New research suggests that a sprinkle of one of your favorite spices may do more than tickle your taste buds—it may improve your memory as well! A paper published in the December 2016 issue of the Journal of Neuroimmune Pharmacology suggests that cinnamon boosts plasticity—the ability to change and grow in response to new information—in a key memory region of the brain called the hippocampus. Working with laboratory mice, the researchers compared the animals’ ability to remember how to navigate a maze. Scientists then separated the mice into two groups, one consisting of good learners and the other of poor learners. The scientists fed the poor learners regular doses of cinnamon over a one-month period, and tested the animals again. They found that the “spice mice” had essentially been converted into good learners, showing more than twice the ability to learn maze navigation after treatment with cinnamon than they had in the initial maze test. Although it is not clear precisely how cinnamon improves memory, it is thought that the spice is converted in the liver into a chemical that enters the brain and somehow enhances the structural integrity of brain cells.

Cinnamon contains cinnamaldehyde, procyanidins, catechins, and other antioxidants and anti-inflammatory compounds.5 Cinnamon can help treat ailments like the common cold, ­vomiting, and the flu. Traditional medicine uses it to improve appetite suppression caused by the flu or common cold, bring down fever, and help protect against and treat symptoms like diarrhea and pain as well.6 Cinnamon also has powerful qualities that help fight chronic and serious diseases.

Cinnamon can lower certain risk factors for cardiovascular disease, like cholesterol and triglyceride levels. It also benefits those with diabetes; one substance found in cinnamon has been termed the “insulin-potentiating factor,” as it helps to lower blood glucose levels. Cinnamon also shows a neuroprotective effect against cognitive decline, Parkinson’s disease, and Alzheimer’s disease. These qualities, along with a potential to protect against cancer, make this a fabulous spice for fighting disease.[5] (Be sure to read more about cinnamon’s health benefits in the accompanying sidebar.)

How to use it: Cinnamon is most commonly used as a ground powder. Add it directly to baked goods, meals, or even coffee. If you wish to infuse an entire dish with cinnamon, place cinnamon sticks into your pan while cooking. A cinnamon supplement of 2,000 mg daily can also be used.

Cloves have one of the highest contents of polyphenols and antioxidant compounds, which make this spice a powerful superfood.7 Polyphenols and antioxidants help to protect the body from oxidative damage, which is implicated in diseases ranging from cancer to Alzheimer’s disease to heart failure. Cloves contain a compound called eugenol, which is quite well known for its health benefits.[7]

Cloves have been shown to have antitumor activities in laboratory studies, and so may be a potential cancer therapy.8 They also show antiviral and antimicrobial effects, making them useful in the prevention of infection and spread of illness. What’s more, cloves might have pain-relieving properties.[7]

How to use it: A little bit of clove goes a long way. Add a small amount of the dried, powder form of the spice to baked goods, or use the whole pod in dishes like curries or meat marinades to infuse the flavor evenly throughout. Cloves are often combined with citrus fruits for a unique flavor combination.

The name allspice refers to the flavor of this spice, which is thought to combine the tastes of pepper, cinnamon, nutmeg, and cloves. This spice contains antioxidants and anti-inflammatory molecules, as well as large amounts of eugenol.[9]

Allspice has cancer-fighting properties as well. It induces cell death in cancer cells and also helps prevent proliferation of these cells. Compounds like eugenol, quercetin, and gallic acid all contribute to this effect.9 It has antibacterial qualities and the essential oils of allspice have been used to deodorize body odor.10 Cloves may help treat hypertension and premenstrual syndrome, too.[9]

How to use it: In baked goods, try replacing cinnamon or nutmeg with powdered allspice instead. Not much is needed to enrich your recipe with the distinct flavor. It is delicious in barbecue sauce, curries, and seafood dishes as well. Originally published in November 2016 and updated.