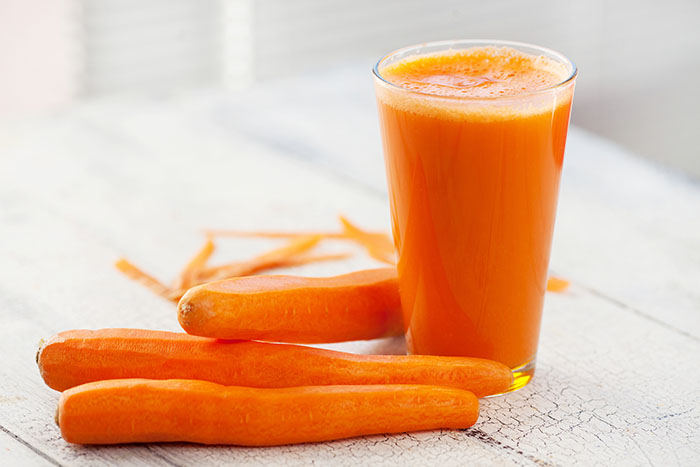 Carrots contain vitamins A, C, and B6; these three vitamins help fight these free radicals.

One way of weaning yourself off one or more of the top five worst drinks for your body is to learn how to enjoy the fabulous flavor of our top 5 healthy beverages. And that won’t be hard to do; these healthy beverages are refreshing and delicious.

Green tea is No. 1 among our healthy beverages because it provides so many positive benefits, including the ability to fight cancer and lower the risk of heart disease. Green tea helps lower cholesterol, boosts metabolism, and aids in weight loss, and also prevents such health problems as diabetes, stoke, osteoporosis, and dementia.[1]

Interestingly, green tea also kills the influenza virus.[2] Many varieties of green tea with various flavors are available online and at your local grocer. Don’t give up if the first one you try doesn’t suit your taste. Green tea is so remarkably healthy for your body that you should be willing to keep trying different varieties until you find one you love. Then, make it a daily habit.

Apple cider vinegar is made from liquid squeezed from pressed apples. It has often been referred to as an ancient “folk” remedy. However, more recent research has shown that consuming apple cider vinegar can have many positive health benefits and thus it is number two on the list of top healthy beverages.

The benefits of consuming apple cider vinegar regularly include:

N. 3 on the list of healthy beverages is water. Why? Water is the most essential component of your body, the most essential nutrient in your diet, and something you can’t survive without for more than two to four days. In fact, water comprises about 60 percent of your body weight. Without optimal water, your body can’t circulate all the other necessary nutrients, hormones, and other compounds you depend on. Lack of water will stop biochemical reactions in their tracks, disrupt your metabolism, slow the transportation of substances into and out of cells, and impair numerous other crucial physiologic processes. You should try to drink half of your body weight in ounces of water per day. This means if you weigh 140 pounds, your goal should be to drink 70 ounces of water per day.

But not just any water is good for you. In fact, virtually all municipal “tap water” sources should be avoided. Heavy metals like lead, mercury, and various other synthetic chemicals contaminate the water supply so it is critically important to drink water that has been purified. These contaminants are the root cause of many degenerative and neurological illnesses including chronic fatigue, anxiety, depression, and Alzheimer’s diseases. While water treatment facilities do their best  to disinfect, filter and remove what particles they can, they cannot protect the population completely. Thus, it’s best to drink water that has been purified at home using a water purification system, or to drink bottled water.

One interesting side note on bottled water: Most brands of bottled water types are labeled “spring water,” but this often is inaccurate. Some bottled water actually comes from a municipal water supply. When buying bottled water, it’s best to purchase purified water, which is usually labeled as such but can also be labeled for the specific process used to produce it (for example, “reverse osmosis” drinking water or “distilled” drinking water).

Also, don’t leave water bottles in the sun or heat as the plastic containers can melt and leach chemicals into the water such as phthalates, BPA (Bisphenol-A) or polychlorinated biphenyls.

Many people think that protein drinks should be utilized only by athletes who are building muscle, but this is not true. While whey protein helps with muscle building, it is also full of essential amino acids that improve wound healing, that manage or reduce weight, and that boost the immune system. Whey also has antioxidant, anti-tumor, anti-bacterial and anti-viral properties, which is why it ranks as No. 4 on our list of healthy beverages.[6]

Look for grass-fed, Certified rBGH-free whey protein powder to make your smoothie. The grass-fed cows will present the safest and most favorable amino acid and nutrient profile while the rBGH-free label will assure that the cows have not been hormone-treated with genetically-engineered recombinant bovine growth hormone (rBHG).

While all vegetable juices are considered healthy beverages, carrot juice ranks among the top. Carrots contain an array of vitamins, minerals, and other antioxidants such as beta carotene. They are also powerful antimicrobials, meaning they can fight bacteria and fungi like candida (yeast).[7]

Carrots also contain isocoumarin, which is not only an antimicrobial but which has antitumor (anti-cancer) effects. As an added bonus, juicing raw carrots adds a natural sweetness to your drink, which may make your juicing efforts more enjoyable. There you have it: the top 5 healthy beverages for you and your family to enjoy. This is not an all-exclusive list; certainly, other drinks such as fruit smoothies and herbal teas are quite healthy, too. But the vast benefits these five provide put them at the top of our list. Cheers!