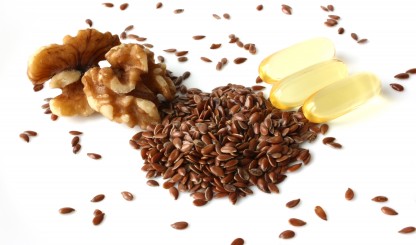 Which is the best omega-3 supplement?The flaxseed oil vs. fish oil debate has been going on for years.

Have you heard the claim that the best omega-3 supplement is a vegetarian omega-3? The fish oil vs. flaxseed oil debate has been going on for years but recently came to the forefront again. Some well-known natural health experts say that it’s better to get your long-chain omega-3 fatty acids (EPA, or eicosapentaenoic acid, and DHA, or docosahexaenoic acid) from the conversion of flax and other plant-based omega-3 oils. Other experts claim this is inaccurate and state that it’s best to take a direct source of EPA and DHA from fish or algae.

In this article, we examine the evidence in looking for the best omega-3 supplement.

There are three major types of omega-3 fatty acids that are ingested in foods and used by the body:

Most of the ALA consumed in the diet comes from plant sources such as flaxseed and other nuts and seeds. Once eaten, the body uses certain vitamins, minerals, and genetically controlled enzymes to convert ALA to EPA and then to DHA.

EPA and DHA can also be consumed directly. The highest concentrations of EPA and DHA are found in cold-water fish such as salmon, tuna, and herring. EPA and DHA are the two types of omega-3 fatty acids that serve important roles in cell signaling, gene expression, inflammatory processes, and other bodily processes fundamental to health. In other words, it is EPA and DHA, rather than ALA, that perform essential functions in the body.

But the truth is that conversion of ALA from other omega-3 oils into EPA and DHA is dependent on much more than vitamin B6. Niacin, vitamin C, zinc, and magnesium are needed for the conversion, too.

But that’s only a small part of the story. In fact, scientists still don’t have the full conversion picture totally figured out. However, they have discovered that genetics, age, gender, and—perhaps most important—the other fats in your diet all play important roles in how much EPA and DHA can be synthesized.

Consider these factors, all of which iInfluence your body’s ability to convert ALA to EPA and DHA:

Algae or Fish Oil is the Best Omega-3 Supplement

In summary, the question of what the best omega-3 supplement is should be put to rest. Although ALA can be used for EPA and DHA synthesis, studies have found that this pathway is limited in humans and varies between individuals based on genes, sex, age, and intake of other fats and nutrients.

So far, no human studies have shown that intake of vegetarian omega-3 sources (ALA) plus certain vitamins, like vitamin B6, leads to optimal levels of EPA and DHA inside the body’s cells and tissues. Therefore, direct dietary intake of omega-3 fats rich in EPA and DHA through food or supplements is the most beneficial.

To learn more about choosing the best omega-3 supplement, see the following posts:

Originally published in 2013 and regularly updated.