Home » Daily » Nutrition » Millet is No “Run of the Mill” Grain 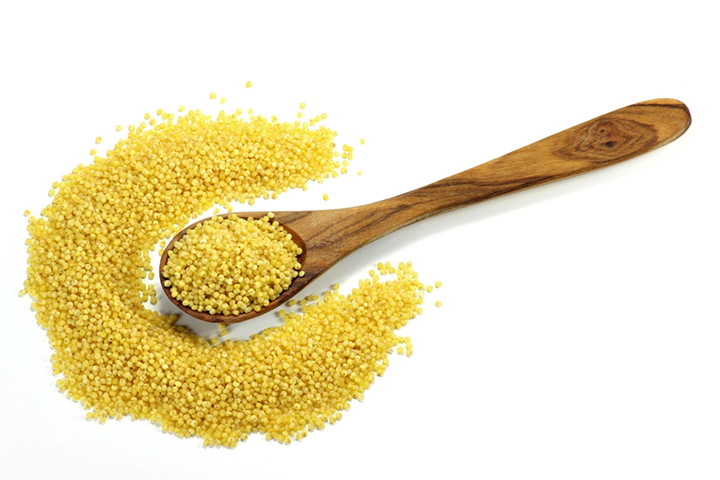 Prepare millet as you would rice and serve it with vegetables as a savory side dish, as breakfast porridge with fruit and nuts, or baked into bread or muffins.

What is millet? It may not be in most kitchens, but the popularity of this grain is gaining traction. First cultivated about 10,000 years ago in Asia and Africa, millet became a food staple around the world. The Bible refers to it in bread-making, the Romans ate it as porridge, and it was the prevalent grain in China before rice.

Many cuisines include millet, such as flatbreads in India (roti and bhakri), porridge in China and Russia, and even beer in parts of Africa. Packed with nutrients, this quick-cooking grain is forging its way onto the American plate.

Millet is the generic name for over 6,000 species of grasses, but mostly refers to those of the Poaceae family, which are small seed grasses. Foxtail, finger, koda, and pearl (Pennisetum glaucum) are among the most important species of millet, which can be white, gray, yellow, or red. Millet is a tiny seed and a common ingredient in bird and animal feed. In terms of nutrients, millet is hardly for the birds. A cup of cooked millet contains 12 percent DV (Daily Value, based on 2,000 calories/day) each of protein and the B vitamins thiamin and niacin.

Readily available in health food and specialty markets and, increasingly, in mainstream grocery stores, millet is mainly sold hulled, as a whole grain, and as flour. Whether packaged or in bulk containers, be sure it’s free of moisture. Sealed in an airtight container, it will keep in a cool, dark, dry place for several months. Prepare this versatile grain as you would rice and serve it with vegetables as a savory side dish, as breakfast porridge with fruit and nuts, or baked into bread or muffins. Toasting it first enhances millet’s nutty flavor.
—Lori Zanteson

MILLET WITH ZUCCHINI AND CHICKPEAS

Directions
1. In a medium pot, heat 1 Tbsp olive oil over medium heat. Add zucchini, salt and pepper and sauté for 4-5 minutes, until crisp-tender. Remove zucchini from pot and set aside.
2. To the same pot, add 2 Tbsp olive oil, onions and garlic and sauté for 4-5 minutes, until soft.
3. Add millet and toast for 2-3 minutes, stirring.
4. Add vegetable broth, water, and curry powder. Cover and bring to a boil, then simmer over low for 15-20 minutes. Remove from heat, sit for 5 minutes, and fluff with a fork.
5. Add zucchini, chickpeas, and raisins.