Home » Daily » Nutrition » How to Motivate Yourself to Work Out: Setting Routines to Make Exercise a Regular Habit 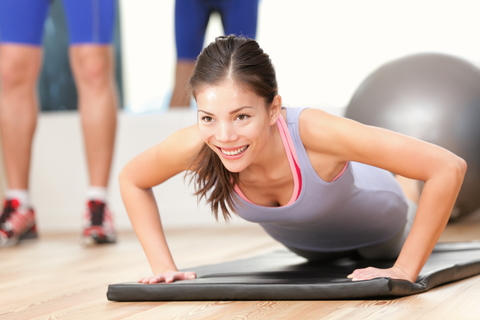 It can be hard to actually follow through with plans to stay physically active.

It’s easy to come up with reasons to put off exercise. “I really need to stop at the grocery store on the way home from work, so I’ll just skip going to the gym today.” “I’m a little tired this morning, maybe I’ll go for a run later instead.” “I am so busy with work this week, but next week I will definitely workout more.”

These kinds of excuses are all too familiar to most of us. I know that if I don’t exercise in the mid-morning like I usually do, I rarely get around to it later and will miss out on that day’s workout.

Even if we know how important exercise is for fighting depression, lowering cholesterol, boosting bone health, promoting healthy digestion, and more, it can be hard to actually follow through with plans to stay physically active. And studies show that it can be even more difficult if exercise isn’t a regular part of our routine. The trick to motivating yourself to workout is to make exercise a habit that is so engrained into your routine that you do it automatically.

The importance of instigation habits

Researchers from Iowa State University published a study in Health Psychology that made a distinction between what we actually do during a workout (our exercise execution habits) and how we actually get ourselves to decide to and begin to exercise (our exercise instigation habits).

The study involved 118 healthy adults. The participants were asked to rate the strength of both their exercise execution and instigation habits. They also recorded the frequency with which they exercised over one month.[1]

The results of the study showed that surprisingly, execution habits had no effect on how often someone exercised. In other words, it doesn’t matter so much what you do when you workout; you don’t have to do the same thing everyday when you get to the gym. On the other hand, the study found that instigation habits mattered the most; stronger exercise instigation habits were strongly associated with more frequent exercise.[1] These results show that the strongly engrained habits that actually get you to the gym or out on a run are key to a successful workout plan.

Putting it into practice: finding cues that work for you

By establishing exercise as a hard-to-break-habit, you don’t allow time for talking yourself out of going to the gym or weighing the pros and cons of taking a bike ride. Instead, exercise becomes something that you automatically do.

The trick to developing a strong habit is to find cues that work for you. Perhaps you begin stopping at the gym every day on your drive home from work; the act of getting in your car will eventually serve as a cue for going to the gym, instead of serving as a cue for going home and relaxing. Or maybe the sound of your alarm clock going off in the morning will serve as a cue for putting on your tennis shoes and heading out the door for a run, instead of one for heading to the kitchen for a cup of coffee.

After a while, these habits will become so engrained that you hardly have to think about it.

Sticking to a certain time of day can help immensely, as can making exercise something you do immediately after another regular activity. Whether it is on your lunch break, right after you drop your kids off at school, or at 5’oclock on the dot daily, find a routine and habit that suits you and your schedule. It takes time to establish habits, so be persistent. It might take a month or longer to fully make these cues take root. But pretty soon, you won’t have to think so much about it, and exercise will become not a far off goal, but an automatic part of your routine.

For other tips on how to motivate yourself to workout, go here.

How do you get yourself to exercise regularly? Do you follow a certain routine? Share your experience in the comments section below.