Home » Daily » Nutrition » How to Get Kids to Eat Vegetables: Use Repetition, Rewards, and Role Modeling 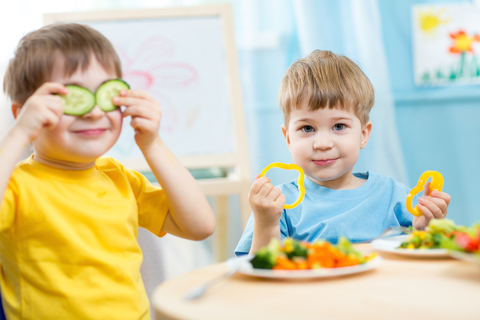 It can be hard to introduce your kids to new foods and to get them to like them.

Are your kids picky eaters? Do you have no luck at all trying to get them to eat certain foods, especially healthy ones like vegetables? It can be hard to introduce your kids to new foods and to get them to like them. Kids are infamous for refusing to even come near certain foods that they are determined not to like. But getting kids to eat healthy is important, as healthy habits start young. And fortunately, it may be more straightforward than you might think. Research shows that the key to working with fussy eaters it to use repetitive exposure, rewards, and role modeling.

The journal Appetite published a study in April 2015 that looked at 115 children two to four years old. The study focused on three different strategies used to help kids to change food preferences:

Use all three for best results

Previous studies have found success using each of the three strategies,[2] but the results of the new study show that a combination of all three of the strategies, rather than just one or two at once, is most effective at changing a child’s food preferences.[1]

Healthy habits start young, so you’ll want to get started training your children to like healthy foods now. If you are at the end of your rope trying to get your kids to eat foods like vegetables, try out the three strategies listed above.

Remember them as the Three R’s: repetition, rewards, and role modeling. First, use repetition, exposing your child to the food multiple times. Next, find a non-food reward to encourage your child when they eat the food. Finally, be a good role model by eating the foods and showing how much you enjoy them. These three steps will help your child to try new foods, and hopefully come to enjoy them.

We have an extensive collection of blogs on children’s health. Read some of the following blogs for tips on keeping your family healthy:

Do you have, or have you had a picky eater? What are you best tips for getting kids to try and enjoy new foods? Share your experiences in the comments section below.