Home » Daily » Nutrition » Healthy Seasonings: 5 Spices You Should Always Have on Hand 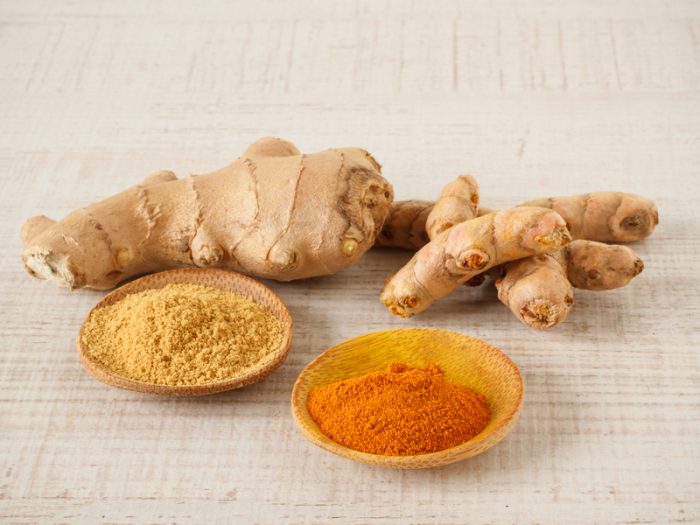 Healthy seasonings on our list of five "must-haves" include ginger and turmeric.

As any good cook knows, the key to making a flavorful, delicious dish is a pinch of the right healthy seasonings. Seasonings and spices are an essential part of our lives. Whether for full-course meals or savory and sweet snacks, cultures world-wide have been using these culinary essentials to create extraordinary dishes for a millennia.

Many of us are unaware that these staple ingredients carry important health benefits, too. Seasonings we should have in the kitchen in heavy rotation—such as ginger, turmeric, garlic, mint, and cinnamon—not only add zest to meals, they can also help to improve your health.

Let’s take a look at these seasonings, their health benefits, and how to best incorporate them into your everyday cooking.

Ginger has been used for centuries as an ailment and pain reliever by cultures across the globe. More recently however, the University of Georgia conducted a study that suggested ginger can reduce pain by upwards of 25 percent. Ginger acts as an anti-inflammatory agent that can aid in relieving pains and aches caused by strenuous activity or from chronic joint pain.

The consumption of ginger, in either a pill or raw form (and let’s stick to raw for our purposes), was found to successfully aid those suffering from muscle and joint pain within a few days of use. Ginger has also been shown to help manage a number of other ailments and even has been shown to contain cancer-fighting properties.

Ginger can be utilized in countless wonderful dishes, including Ginger-Honey Wings and Vietnamese-style Chicken Pho. It pairs well with any sweet or savory dish. And, of course, it’s an ideal beverage in the form of ginger tea.

Turmeric is a popular seasoning across the Eastern world and can be found in almost every Indian dish. This ingredient is sure to spice up any meal, from butter chicken to turmeric-infused rice.

Turmeric is known for a multitude of benefits to your body, from aiding in liver health to reducing fat cells to relieving high blood pressure. In 2009, Tufts University presented findings that supported the long-standing belief that turmeric could be used as a healthy and natural aid for individuals who need to lose weight due to health reasons (although let’s not think of it as a quick diet fix or fad). Curcumin, a key polyphenol in turmeric, was found to suppress fat cell growth in rats.

Add variety to your dishes and wake up your taste buds with a pop of this seasoning. Turmeric can be incorporated into your weekly meals with recipes like Coconut Chicken Curry and Cauliflower Soup. 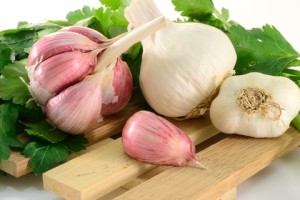 Don’t be afraid of garlic. It’s an essential ingredient for adding flavor to a meal, but it also provides wonderful antioxidant properties and is used for high blood pressure relief.

Allicin is an organic compound found in garlic that acts as an antioxidant when ingested. Researchers at Queens University found that when garlic was given the chance to interact with radicals, it rapidly restricted the harm done by dangerous compounds in the body.

Garlic can be added to a wide range of menu items, from Garlic Lemon Shrimp to Tomato and Garlic Lentils to Garlic and Spinach Orzo. You usually don’t need too much (just a clove or two) to benefit from its flavor.

Mint is usually thought of as an aid for coughs and constipation, but researchers for the U.S. Department of Agriculture found that peppermint has far more health benefits to offer—including antioxidant, antitumor, and antiallergenic abilities.

You can include peppermint into your diet by simply drinking a cup of tea a few times a week. Meals that rely on fresh and dried mint include Mint Pea Soup; Basil, Watermelon, Feta and Mint Salad; and Grilled Steak with Mint Chimichurri.

Plant some mint in your garden, it’s just about the easiest herb to grow. If you have never grown mint before and want to start planting, be sure to maintain it; it grows and expands its roots quickly, much like a fast-growing weed!

Last but not least, one of the most important healthy seasonings in both sweet and savory dishes is cinnamon. In 2017, the University of Michigan revealed through its research that cinnamon has metabolic benefits that can help fight obesity. From testing the spice on human and rat subjects, researchers found that cinnamaldehyde, the compound within cinnamon that provides its distinct flavour, also acts as a metabolism booster that interacts directly with fat cells. Cinnamon has also been shown to help balance blood sugar. This review of the glycemic outcomes of cinnamon suggests cinnamon can be useful in helping to manage type 2 diabetes.

Cinnamon is extremely popular in baked goods, but can also be incorporated into any number of healthy dishes, including Mediterranean Chicken with Cinnamon Couscous, Spiced Butternut Squash Soup, and Toasted Apples with Cinnamon.