Home » Daily » Nutrition » Farmed Salmon: Everything You Need to Know 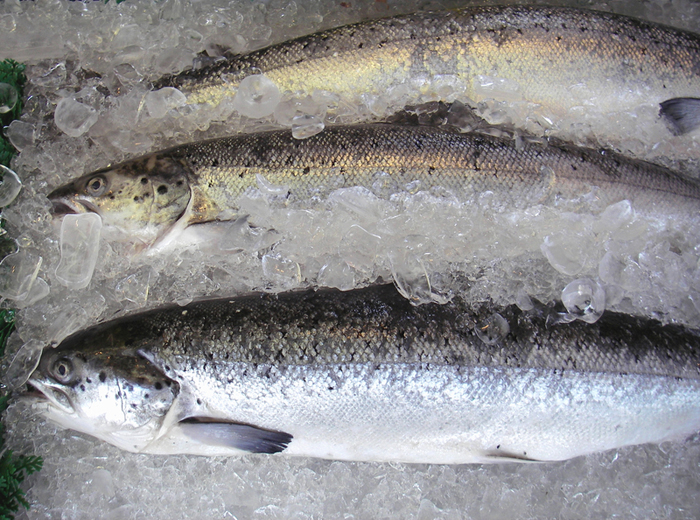 Is farmed salmon safe to eat? Wild, of course, is preferred, but, as our post explains, there are signs that can help you differentiate between safe and suspicious farmed salmon.

Chances are that whenever you read a magazine or website article about healthy eating plans, it will include a recommendation to eat more fish. Nutritional guidelines urge us to consume at least two to three servings of fish per week. Fatty fish is particularly beneficial for your health: rich in protein, and packed with vitamin D, selenium, and the omega-3 fatty acids that have been linked to a lower risk for cardiovascular disease, cancer, and dementia. Salmon is usually high up on the list of options—but when you go to the supermarket to stock up, you will likely be faced with a choice between farmed salmon and wild salmon. Which option is best?

Farmed salmon makes up about 90 percent of the salmon Americans eat, but the way the fish are farmed might give you pause for thought. This is not to say that farming fish is a bad idea—in fact, it’s a good solution to the overfishing that has impacted some fish species. And if done right, it can help conserve fish habitats.

Farmed salmon also may be given strong pesticides to prevent infestation with tiny crustaceans called sea lice, which can harm juvenile salmon and are easily spread. There are regulations to help prevent the spread of sea lice to native salmon populations—farmed salmon have to be monitored on a monthly basis for the presence of these parasites, and fisheries are required to notify the federal authorities if lice are detected. However, studies suggest that wild juvenile salmon in close vicinity to fisheries are 73 times more likely to be infested with sea lice than juvenile salmon whose habitats are some distance away,

There also is concern over how easily antibiotic residues may spread if fish pens are situated within rivers—plus, the fish can escape their pens. This can be an important factor if the fish are not native to the area in which they are being farmed. In August 2017, as many as 263,000 Atlantic salmon were released into Puget Sound when the pens at a Washington State salmon farm failed. The long-term effects of the escape are not known at present, and some scientists say it is unlikely that the escaped salmon will effectively compete with native species. But it is possible the fish are reproducing and establishing themselves in waters where they will compete with wild Pacific salmon, and possibly spread disease.

Polychlorinated biphenyls (PCBs) are a class of industrial chemicals that were once used in the manufacture of a wide range of electrical appliances, but they were banned in the United States in 1979 after studies linked them to cancer. PCB residues still exist in the environment, and there are concerns that the residues may contaminate the small fish that are used in some commercial fish feeds. While some older studies have reported high levels of PCBs in farmed salmon, follow-up studies have not confirmed this, and most scientists say that you don’t need to fear the presence of PCBs in farmed salmon.

Responsibly Farmed Salmon Is Out There

Ultimately, experts believe you should keep eating salmon, taking advantage of its well-known health benefits. If you can, opt for wild salmon—but don’t be put off of farmed salmon if it’s more affordable for you. Instead, take the precaution of selecting farmed salmon that is produced sustainably and responsibly, preferably within a closed-tank aquaculture operation that prevents the fish from contaminating wild fish. And choose fish raised in low-density pens that provide the fish with a cleaner environment and more space to swim.

If you’re purchasing fresh farmed salmon, be guided by Seafood Watch, and ask where the fish originates. For frozen farmed salmon, choose options certified by the Aquaculture Stewardship Council—look for its logo on the packaging.