Home » Daily » Nutrition » 8 Ways to Protect Yourself from Aluminum Poisoning 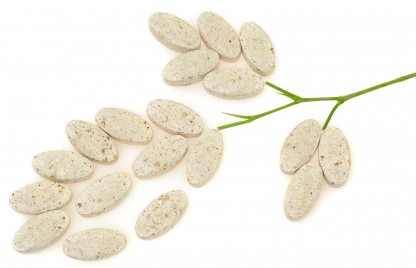 These commonly used natural compounds protect your body and brain from the ravaging effects of aluminum poisoning.

Paramount to protecting yourself from the toxic effects of aluminum poisoning is taking care to avoid ingesting it or exposing yourself to it through medications, skin care products, and other sources of aluminum contamination. But even with careful avoidance, aluminum is so abundant in the environment and so widely used in contemporary life that increasing amounts of this toxic metal are stored in our brains and bodies[1], potentially increasing our risk for serious diseases like breast cancer [2] and Alzheimer’s disease. [3]

Fortunately, researchers are discovering a host of natural substances that can prevent and/or treat aluminum’s toxic effects.

As described in part 2, observational studies show that people who ingest more aluminum from drinking water or have a higher geographical exposure to aluminum show greater cognitive decline with time and are at a significantly increased risk of dementia.[4] Conversely, an increase in silica intake from drinking water is associated with a reduced risk of dementia.[4] Silica helps aluminum to be excreted via urine but allows essential metals, such as iron and copper, to stay in the body.

Furthermore, studies have shown that drinking silica-rich mineral water each day for 12 weeks helps to remove aluminum from the body.[5] Preliminary evidence indicates that drinking silica-rich mineral water decreases body levels of aluminum in people with Alzheimer’s disease. In some patients, it simultaneously improves cognitive performance to a significant degree.[5]

To make sure you’re getting high-quality, pure silica and to avoid the expense and wastefulness of buying bottled water, I prefer supplementing with silica in the form of choline-stabilized ortho-silicic acid. This is sold in liquid and capsule form as BioSil by Natural Factors or as Regenemax by Xymogen. It is the most bioavailable source of silica and has been studied in human placebo-controlled trials.[6]

Silica has additional health benefits. When taken in the form of choline-stabilized ortho-silicic acid, it stimulates collagen production and connective tissue function and repair.[6] Because of this, it has been shown to help to increase bone mineral density in osteoporosis and improve the appearance and texture of aging skin, hair, and nails.[6] If you want to try this form of silica, follow the recommendations on the BioSil or Regenemax bottle.

The benefits of L-theanine

L-theanine is an amino acid derivative primarily found in tea. It has been reported to promote relaxation, relieve perceptions of stress, and protect the nervous system.[7] One recent study investigated the role of L-theanine in alleviating the negative effects of aluminum-induced toxicity in the brains of rats.[7] As expected, rats given aluminum showed significant increases in oxidative stress. Their antioxidant systems that normally protect the brain from free-radical damage were impaired by the aluminum. The aluminum poisoning also caused pathological changes in the same brain regions affected by Alzheimer’s disease.

However, when the rats were given L-theanine (about 100 mg) prior to being given aluminum, they showed significant increases in antioxidant activity and decreases in oxidative stress. Not only that, but the pathological brain changes were reversed. The study authors concluded L-theanine clearly counteracts the damage inflicted by aluminium on the brain in rats.[7]

If you want to take L-theanine, take a 200-mg capsule before bed. If you typically suffer from anxiety or feel highly stressed, you can also try an additional 200 mg of L-theanine during the day for enhanced relaxation without sedation. Reduce your stress and protect your brain simultaneously.

Green tea extract contains small amounts of L-theanine, along with other important compounds with medicinal effects, such as epigallocatechin gallate and epicatechin. A recent study examined the effects of green tea extract on rats with aluminum toxicity.[8] The rats with aluminum poisoning showed impaired task performance and had decreased antioxidant activity in all brain regions. When the rats were pre-treated with green tea extract, the damaging effects of aluminum on their task performance and on their impaired antioxidant brain activity was completely reversed. The study authors speculated that green tea extract reduces aluminum-induced brain toxicity through its antioxidant effects as well as its ability to improve the functioning of synapses between neurons.

Green tea extract and L-theanine may help reverse aluminum toxicity and treat cognitive impairment even better when used in combination. In one recent randomized, double-blind, placebo-controlled study, 91 patients with mild cognitive impairment took 1,680 mg per day of a combination of L-theanine and green tea extract for 16 weeks.[9] The combination treatment led to improvements in memory and selective attention. Brain theta waves, an indicator of cognitive alertness, were increased significantly for three hours.

Another herbal extract that can protect the brain from aluminum poisoning is Bacopa monniera. This medicinal herb is used as a “nerve tonic” in Ayurveda, the traditional medicinal system in India. Researchers recently discovered that bacopa extract prevents aluminum toxicity in the cerebral cortex of rats. In one study, rats given bacopa extract along with aluminum in their drinking water showed significantly less aluminum-initiated damage to lipids and proteins in brain cells.[10] The bacopa extract also prevented a decline in the normal antioxidant activity associated with aluminum. In another study, aluminum in rats’ drinking water caused significant memory impairment on two different maze tests.[11] However, rats treated with bacopa extract were significantly protected against aluminum-induced memory impairment compared to rats not given bacopa.

In addition to having significant antioxidant activity in the brain and other effects that may help protect brain cells, bacopa has been found to enhance several aspects of mental function and learning ability in studies with patients suffering from age-associated memory impairment.[12] If you want to try bacopa, use the dose most commonly used in human research: 300 to 450 mg per day of an extract standardized to contain 55% bacosides.

Curcumin is the well-known anti-inflammatory and antioxidant compound found in turmeric. What might surprise you about curcumin is that it also protect the brain against cognitive dysfunction and oxidative damage caused by aluminum poisoning.[13] As in the studies mentioned above, rats given aluminum show poor retention of memory in maze tests and displayed marked signs of oxidative damage within the brain. However, curcumin significantly improves memory retention, ameliorates the oxidative damage, and reduces aluminum levels in aluminum treated rats.[13]

A second study in aluminum-treated rats found that curcumin enhanced the activities of glutathione and superoxide dismutase antioxidant enzymes systems in brain regions that control learning and memory.[14] The study authors concluded that curcumin exerts a protective effect against aluminum-induced age-related changes by decreasing oxidative stress in the brain.[14]

Because of its anti-inflammatory properties, curcumin supplements are an excellent option for brain protection in anyone with a chronic disease related to inflammation: joint disease, heart disease, diabetes, autoimmune disease, fatigue, depression, cancer, and more. Look for turmeric extracts standardized at 90% to 95% curcumin and take at a dose of 500 mg two or three times daily.

In addition to the natural compounds discussed above, animal studies show that vitamins C and E and the mineral selenium each help to reduce the toxic effects of aluminum.[15,16]  Each of these compounds alone has been shown to alleviate aluminum poisoning in the brain.[15,16]

Aim for a high intake of these three important antioxidant nutrients from your diet by including lots of fruits, vegetables, nuts, and whole grains. Get extra amounts of these nutrients in a high-quality multivitamin and mineral formula.

What strategies do you use to protect yourself from aluminum? Have you tried any of these supplements? Please tell us about it in the comments section below.
Originally published in 2014, this post has been updated.