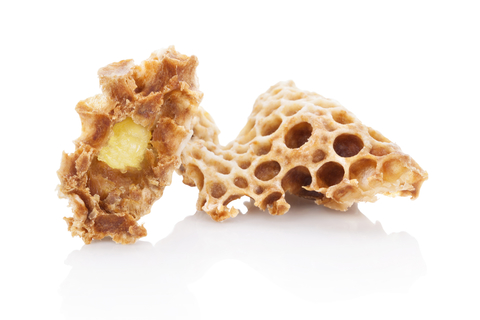 Evidence suggests royal jelly can be helpful for a variety of conditions.

The queen bee is the undisputed leader of her hive. She is largest bee and the only one to lay fertilized eggs. This job is very demanding, and a larvae destined to become the new queen must be fed special food: royal jelly. Fit for a queen bee, royal jelly benefits humans as well. It has a unique composition of nutrients that exhibit antitumor, antioxidant, anti-inflammatory, antibacterial, anti-allergic, and anti-hypertensive properties in animal studies.[1] Royal jelly has proteins, free amino acids, phenolic compounds, and valuable vitamins that make it very nutritive.[2] Evidence suggests it can be helpful for a variety of conditions.

A 2014 study asked 92 women to rate the severity of premenstrual symptoms before and after supplementation with royal jelly. The women took either one capsule (1,000 mg) of royal jelly or placebo each day for a total of two menstrual cycles. The women taking the royal jelly experienced less severe PMS symptoms than the control group. Although the mechanism is not entirely known, the researchers hypothesize that royal jelly affects estrogen activity in the body.[2]

As an antioxidant, royal jelly also seems to have anti-aging effects. A study found that mice fed royal jelly had an increased average life span compared to the control group.[5] Royal jelly may also help learning and memory. Based on initial evidence that royal jelly contains many compounds that may influence the nervous system and cognition, researchers looked at the impact of royal jelly on spatial memory in aged rats. They found that rats given the royal jelly for 2 months had better spatial memory and cognitive performance compared to controls.[6] Although the results haven’t yet been replicated in humans, they provide promising evidence for the impact of royal jelly on memory and aging.

How to use royal jelly

Royal jelly can be formulated into a capsule supplement or kept as a jelly that is eaten by the spoonful. The fresh, raw form is less processed and is preferred. Take ½ teaspoon twice daily and keep refrigerated. If you take a capsule, take 500 to 1000 mg per day. If you have allergies to pollen, honey, or bee stings, you are advised not to supplement with royal jelly, as it can induce an allergic response.

Have you ever tried royal jelly? Do you experience any of these royal jelly benefits? Share your experience in the comments section below.