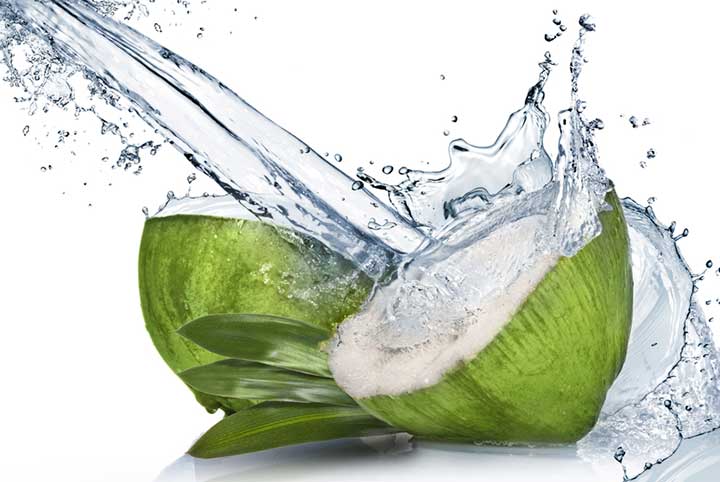 Coconut water has become increasingly popular as a drink around the world because of its natural ingredients, electrolytes, and mineral content combined with its low levels of fat, calories, and carbohydrates. Coconut water health benefits include strong antioxidant effects; protection of the cardiovascular system and the liver; and reduction of cholesterol, blood sugar, and blood pressure in animal studies.[1]

In human clinical trials, coconut water has shown effectiveness for total body rehydration and blood volume restoration after exercise, as a therapeutic moisturizer for mild-to-moderate dry skin, and as a treatment for high blood pressure.[2] Coconut water health benefits clearly exist, but so do risks. (In this accompanying article, you’ll learn about coconut water disadvantages, who should avoid it, and why.)

What Is Coconut Water?

Coconut water comes from the cavity of the fruit of the coconut palm, which is grown throughout the world in tropical climates. Coconut water is about 95 percent water, 4 percent carbohydrates, 0.1 percent fat, 0.02 percent calcium, 0.01 percent phosphorous, and 0.5 percent iron, and contains amino acids, vitamin C, B complex vitamins, and minerals, including sodium and magnesium.[3,6] Coconut water also contains enzymes and various phytochemicals, some of which appear to have anti-cancer and anti-aging effects in preliminary studies.[3]

The contents of coconut water are similar to the ingredients in sports drinks and oral rehydration solutions, except that coconut water contains less sodium and more potassium, plus small amounts of the other nutrients just mentioned. The exact amounts and proportions of these compounds depends on the age and ripeness of the coconut fruit.[6] In general, coconut water is derived from younger, greener coconuts of the green dwarf variety, which has been shown to have the most powerful antioxidant activity and the highest levels of vitamin C and health-promoting polyphenol compounds among varieties.[7]

A small human trial compared the effects of coconut water to plain bottled water and to another tropical drink called mauby in 28 patients with hypertension.[5] (Mauby is a tree-bark-based beverage grown and widely consumed in the Caribbean. It is made with sugar, spices, and the bark and/or fruit of certain species of Colubrina trees.)

For both the coconut water group and the mauby group, the largest average decreases in pressure were about 12 mmHg systolic and 7 mmHg, whereas they were 24 mmHg and 15 mmHg, respectively, for the group receiving the mixture. Although the combination led to the greatest blood pressure reductions, not as many people significantly benefited compared to those drinking coconut water alone.

Although these results are promising, researchers agree that more randomized trials with larger numbers of subject need to be conducted before there is sufficient evidence that coconut water is effective in treating hypertension.[2]

Studies have shown the efficacy of coconut water for enhancing hydration and exercise performance following dehydrating exercise.[8,9] A series of two randomized trials compared the effectiveness of fresh young coconut water to a typical carbohydrate-electrolyte sports drink and to plain water.

In the first trial, eight healthy male subjects exercised in the heat until almost 3 percent of their body weight was lost. Afterwards, they sat for two hours and drank one of the three fluids in amounts to replace 120 percent of the body weight lost.

The study authors concluded that coconut water could be used for whole-body rehydration after exercise-induced dehydration. (Read more in Natural Cures for Nausea and Dehydration.)

It should be noted that coconut water does not have a balanced electrolyte composition. It is too low in glucose, sodium, and chloride to fit the definition of an oral rehydration solution. This is likely why the sodium-enriched coconut water in the study performed better than regular coconut water. Nevertheless, unless you’re an athlete exercising for long periods in the heat, coconut water without added sodium is likely sufficient for rehydration.

Despite not being a balanced electrolyte solution, coconut water has also been found to be an effective rehydration solution for patients with mild diarrhea.[10] However, it should not be used in patients with severe diarrhea or in patients who are severely dehydrated and/or in whom kidney function is impaired. Read this article to learn why you shouldn’t use coconut water in any of these cases and address additional risks.

This post originally appeared in 2014 and is regularly updated.