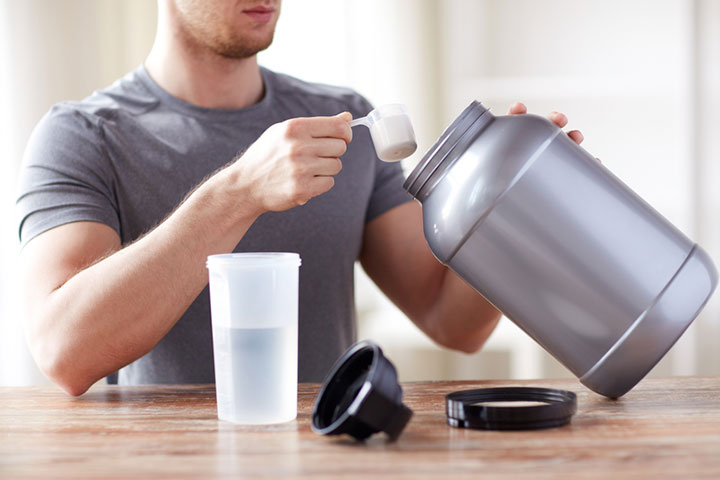 Creatine should only be used for strength training purposes

Creatine supplements are a popular choice for exercisers who want to improve strength, energy, and muscle mass. Creatine benefits muscle growth and strength by increasing the ATP levels of working muscles by about 35%.[1,2] Because it also provides this benefit to brain cells, athletes using creatine can potentially work harder due to increased mental focus and concentration.[3]

In one study, weight lifters who used creatine with a glucose, taurine, and electrolyte supplement were able to increase weight resistance more rapidly than those who did not.[4] After one month, the supplement users lifted an average of 900 pounds more in bench press, squat, and power clean while also increasing their sprinting speed. Another study found that creatine users outperform non-users by 50% on bench press and 33% on squats.[5]

The same study also found that supplement users increased their fat-free body mass by more than double that of non-users.[5] An additional study confirms this mass increase while also finding no differences in body water between users and non-users, contradicting the popular idea that creatine increases water retention.[4] Neither study reported any negative side effects.

Creatine is Not Dangerous to the Kidneys or Liver

Large quantities of excess creatine are filtered out by the kidneys and excreted in the urine. For users who consume the recommended dose of 20 grams per day, up to 90% of the creatine is filtered and excreted.[8] This has led to the myth that supplement use can weaken and damage kidney filtration over time. However, studies suggest that creatine supplementation does not cause any short or long term side effects.

In one study, researchers monitoring kidney excretion in creatine users after 5 days, 9 weeks, and 5 years found no negative effects on kidney function after any of these time periods.[6] The researchers also found that liver enzymes and urea production rates were not affected after 4 weeks of creatine use, and a further study into liver function showed that amino acids and other molecular products of the liver were also unaffected.[7]

A 2002 review states that healthy people can safely excrete both creatine and its end product creatinine,[8] and a study concerning kidney filtration rate, reabsorption, and membrane permeability showed no negative effects on these delicate kidney functions after either 10 months or 5 years of creatine use.[9]

Correct Use of Creatine

Creatine should only be used for strength training purposes, as it only benefits anaerobic fast-twitch muscle that is used for short, high-intensity activity. Aerobic slow-twitch muscles that are used for running or isometric endurance exercises are not enhanced by creatine use.[10]

Dosage: One study shows that about 20 grams of creatine per day results in a significant increase of muscle creatine content after two days.[2] Most supplement powders contain between three and five grams per serving, which is also the amount contained in a 16-ounce steak. Taking a five-gram dose every two hours results in an optimal sustained plasma concentration.[2]

Results: Subjects achieved the results mentioned above after about five to eight weeks of strength training while taking 15 to 20 grams of creatine per day.[4,5] Although much of this dose will be excreted in the urine, the studies show that this is the amount necessary to concentrate enough creatine in muscle tissue to achieve increases in strength and mass.

Do you use creatine for extra strength and energy? What types give you the best results? Share your experience in the comments section below.