Home » Daily » Memory » What is Vascular Dementia and Should I Be Worried About It? 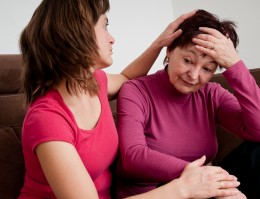 People with mild cognitive impairment (pre-dementia) may not have Alzheimer’s disease; in actuality, they may be suffering from vascular dementia. Experts also call this “vascular cognitive impairment.” It is due to chronic reduced blood flow in the brain, eventually resulting in dementia. Remember, just because you can breathe doesn’t mean your brain is getting enough oxygen!

Who is At Risk for Developing Vascular Dementia?

Vascular dementia is the second most common form of dementia after Alzheimer’s, accounting for up to 40 percent of dementia cases. Risk factors include high blood pressure, heart disease, diabetes, smoking, alcoholism, and high cholesterol.

What Testing Options Are Available?

Although standard blood and thyroid tests may evaluate vascular cognitive impairment, an MRI is the most useful screen, which shows areas of the brain that have been affected by small strokes.

The brain has one of the body’s richest networks of blood vessels and is vulnerable to any hindrances in blood flow, which carries oxygen. Without sufficient oxygen brain cells die and the brain degenerates quickly. Everyday conditions that affect many people can also inhibit oxygenation of the brain and increase the risk of vascular dementia. These include:

What are the Symptoms of Vascular Dementia?

Long before vascular cognitive impairment or dementia sets in, symptoms that can alert you to poor blood flow and oxygenation include brain fog, becoming easily fatigued, cold hands and feet, erectile dysfunction, and chronic fungal growth on fingernails and toenails.

Some of the best ways to oxygenate the brain are to lower inflammation and stabilize blood sugar. This is done through a diet that is anti-inflammatory, liberal in proteins and healthy fats, low in starchy carbohydrates such as grains and potatoes, and based on unprocessed whole foods. A ketogenic diet that uses coconut oil has also been shown successful in some studies for dementia.

Although lifestyle and dietary factors will help improve oxygenation to the brain and body, thus preventing mild cognitive impairment or dementia, certain herbs have also been shown effective in scientific studies. These include:

These herbs come in various forms and strengths – tinctures, extracts, drops, etc. Therefore, it is best to follow the manufacturer’s dosing instructions on the label.