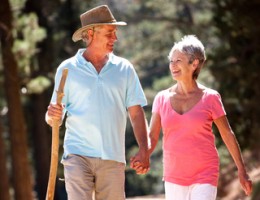 In a study that followed more than 60,000 people over 17 years, researchers measured subjects’ fitness level using a treadmill exercise test. During the study, 164 of the subjects died due to dementia. Researchers discovered that 123 out of those 164 belonged to what they dubbed the “low-fitness group.”

The researchers concluded people in the medium- and high-fitness groups had less than half the risk of dying than the low-fitness group.[1]

Another study found that a sedentary lifestyle especially increases your risk for Alzheimer’s if you already have a genetic tendency for the disease.[2] Researchers looked at a group of 201 adults between the ages of 45 and 88 who showed no symptoms of Alzheimer’s. Of that group, 56 carried a gene that makes them 15 times more likely to develop Alzheimer’s.

Researchers also scanned the subjects’ brains for signs of amyloid plaques, a hallmark symptom of Alzheimer’s. The group of subjects genetically prone to Alzheimer’s showed much more amyloid plaque than the others—unless they exercised.

The carriers of the gene who walked or jogged at least 30 minutes five times a week had the same plaque accumulation as the group who did not carry the gene. The researchers concluded that regular exercise can reduce plaque accumulation and the risk of Alzheimer’s in people who are genetically predisposed to the disease.

Unfortunately, however, the study also showed that the gene-carrying subjects who rarely or never exercised also had the most plaque accumulation in the group, raising their risk of Alzheimer’s later in life.[3]

Consistency is key to preventing Alzheimer’s

The Alzheimer’s Research and Prevention Foundation says that regular physical exercise reduces the risk of Alzheimer’s by 50 percent, and can slow deterioration in those who have already developed cognitive decline. Developing an exercise routine to protect your brain health and longevity doesn’t mean you have to launch into an intimidating or grueling regime.

The body and brain thrive on regular activity and putting the muscles to use. In fact, most people report that an exercise routine elevates their mood, improves self-confidence, and helps them think more clearly.

To encourage consistency, pick something enjoyable, such as walking with a friend, and set goals you can easily attain to inspire confidence. A combination of both aerobic and strength training exercise is better than either one done alone. Aim for 30 minutes of aerobic exercise five times a week, which can include walking, cycling, or swimming, or other exercise that gets your heart rate up.

Also include strength training two to three times a week. If you don’t have access to weights, don’t worry. You can get an excellent strength-training workout just using your own body with these bodyweight exercises.

For more tips, be sure to read:

This blog appeared in 2013 and has been updated.