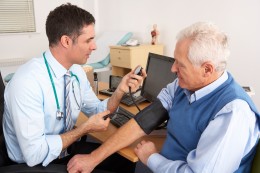 How does high blood pressure cause dementia symptoms?

A 2011 study also showed a link between high blood pressure and dementia symptoms. The study looked at men and women aged 55 and older with Mild Cognitive Impairment, also known as “pre-dementia.” The participants also had conditions that put them at risk for vascular dementia, a form of dementia caused by insufficient blood flow and oxygen in the brain. By the end of the five-year study, almost half of the participants progressed from Mild Cognitive Impairment to Alzheimer’s. Researchers showed those with vascular risk factors such as high blood pressure, high cholesterol, and diabetes were twice as likely to develop Alzheimer’s. However, the participants who received treatment for their vascular risk factor were almost 40 percent less likely to get Alzheimer’s disease compared to those who received no treatment.

The take-home message, according to researchers, is that high blood pressure and heart disease prevention can translate into Mild Cognitive Impairment and Alzheimer’s prevention. Strategies to lower blood pressure include:

Some nutritional and botanical compounds have also been shown to help lower blood pressure:

This blog originally appeared in 2012 and has been updated.