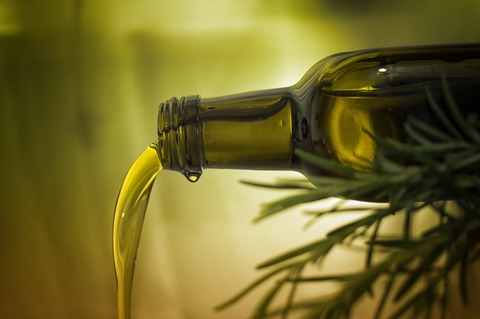 Olive oils differ tremendously in their levels of oleocanthal.

If you think news about the health benefits of olive oil is basically old news, think again. While much of the early olive oil research focused on its healthful monounsaturated fat, a flood of new research is shedding light on the amazing health-promoting properties of its phytochemicals. As you may know, phytochemicals are chemicals in plants that provide enormous health benefits, and some of the healthiest types of phytochemicals are known as polyphenols. As it so happens, extra virgin olive oil contains some potent polyphenols, including one called oleocanthal that has recently been discovered to help prevent Alzheimer’s dementia, cancer, and even joint pain and inflammation.

The results of recent research published in Chemical Neuroscience suggest that oleocanthal may help protect against the development of Alzheimer’s disease by helping the body rid itself of amyloid plaques.[1] Amyloid plaques play a significant role in the progression of Alzheimer’s by accumulating in the brain over time, causing irrevocable damage. Oleocanthal was found to increase production of two enzymes needed to remove the amyloid plaques. Following oleocanthal treatment, there was a significant increase in beta-amyloid degradation and removal in the brains of mice.

The research team from the University of Louisiana at Monroe, led by Amal Kaddoumi, gave groups of mice oleocanthal from olive oil and found that it consistently increased the production of P-glycoprotein and LDL lipoprotein receptor related protein-1, two proteins and key enzymes that are believed to be critical in the removal amyloid plaques, thereby preventing Alzheimer’s from occurring in the first place.”Our results demonstrated significant increase in beta-amyloid degradation as a result of the up-regulation of beta-amyloid degrading enzymes following oleocanthal treatment,” reported the researchers.

This was not the first study to show oleocanthal’s potential role in preventing Alzheimer’s. Alzheimer’s pathology is characterized not only by the accumulation of beta-amyloid proteins in the brain, but by other proteins called tau proteins as well. In 2012, Italian researchers from the University of Salerno’s School of Medicine reported that oleocanthal interferes with the formation of tau protein fibers in the brain to help prevents Alzheimer’s disease.[2]

Could the health benefits of olive oil also include treatment of arthritis and cancer?

Meanwhile, researchers from other institutions have been investigating oleocanthal’s anti-inflammatory and anti-cancer properties. Its anti-inflammatory properties have experts wondering if oleocanthal can help treat arthritis. One research team reported recently that oleocanthal inhibits gene expression of inflammation-causing compounds in the cartilage cells of mice.[3] Oleocanthal “shows potential as a therapeutic weapon for the treatment of inflammatory degenerative joint diseases,” reported researchers.[4] That means that by making olive oil a main source of fat in your diet, you may get relief from painful osteoarthritis symptoms or even be able to prevent arthritis in the first place.

The health benefits of olive oil may even include an ability to help fight off cancer. Oleocanthol has been found to be an effective cancer-fighting compound in preliminary studies. Oleocanthal inhibited the proliferation, migration, and invasion of certain breast and prostate cancer cell lines in recent studies and pharmaceutical researchers are working on ways of isolating and tweaking oleocanthal to turn it into a drug to help treat breast cancer.[5,6]

How to best obtain the health benefits of olive oil

Olive oils differ tremendously in their levels of oleocanthal. And because this information is not typically provided to consumers, you will likely not be able to determine exactly how much oleocanthal your oil contains. Nevertheless, there are ways you can best obtain the health benefits of olive oil by greatly increasing the likelihood of purchasing one with a high oleocanthal concentration.