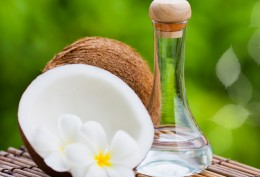 Dementia can be very scary. Increasing episodes of forgetfulness can leave someone feeling helpless and confused.  If not addressed, symptoms can gradually worsen. Fortunately, for those looking for a natural dementia treatment, there is hope! Some people have success using high doses of coconut oil, or a derivative of coconut oil called medium-chain triglyceride (MCT) oil to slow or even reverse dementia. Of the many coconut oil uses, this could be the most exciting.

Mary Newport, MD, a neonatalist, was furiously researching solutions for dementia treatment to help her 58-year-old husband when she stumbled across studies of MCT oil to combat the progression of Alzheimer’s. The body digests MCT oil differently than other fats. Instead of storing MCT as fat, the liver converts it directly to ketone bodies, which are then available for use as energy. Because the brains of people with memory loss, MCI, and Alzheimer’s are unable to utilize glucose properly, MCT oil provides an immediate source of energy for function.

Dr. Newport began her husband on a course of 20 grams a day of MCT oil, and he quickly began recovering his memory and cognitive function. Before the use of MCT oil, he was not able to draw a clock, a common test for Alzheimer’s. After taking the oil for two weeks, his clock-drawing skills improved considerably, and even more so 37 days after taking the oil.

Because glucose metabolism is impaired in the brains of Alzheimer’s patients, MCT oil delivers quickly energy in the way of ketones, making it a novel dementia treatment. Newport went on to publish the book Alzheimer’s Disease: What if There Was a Cure?. Another book that discusses the use of a ketogenic diet, coconut oil, and MCT oil for memory loss, Alzheimer’s, and other neurological diseases is Stop Alzheimer’s Now! By Bruce Fife, N.D., a long-time coconut oil educator.

Following are Newport’s guidelines for introducing MCT oil and coconut oil as a dementia treatment:

What Has Been Your Experience with Coconut Oil for Dementia Treatment?

Dr. Newport certainly has a compelling success story in helping her husband. But she is only one person. What about you? Have you tried it for yourself or a love one and found it to be effective? If so, what did you find to be the key factors to making it work as intended? If it didn’t work well for you, tell us that too. Share your experience with our readers in the Comments section below.

Read more about natural treatments for dementia and Alzheimer’s disease in these blog posts:

This blog was originally published in 2012 and has been updated.