Home » Daily » Memory » 4 Types of Dementia and Their Warning Signs 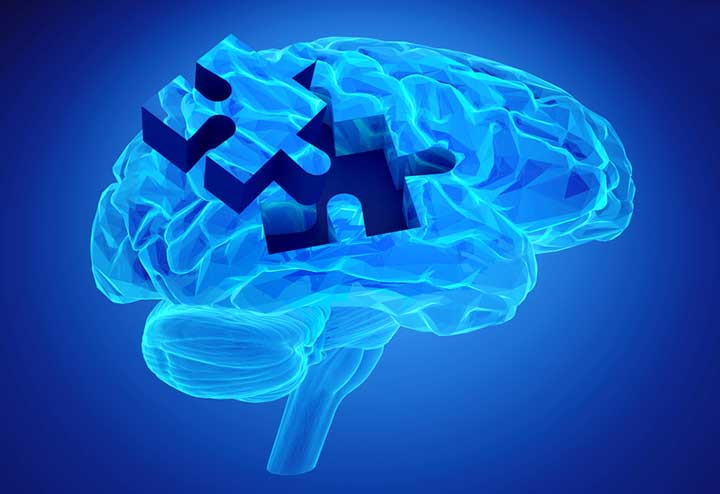 A recent study linked both high- and low-normal serum magnesium levels with dementia as well as Alzheimer's disease.

Alzheimer’s disease is the most common of the various types of dementia and has become something of a “catch-all” term for severe cognitive impairment, but it isn’t the only type of dementia to which older adults are vulnerable.

“Figuring out which type a person has is important, since the drug treatments that can help delay disease progression for some individuals are not suitable for all types of dementia,” says Mount Sinai geriatrician Patricia Bloom, MD. “Some types of dementia also progress faster, making it important for people who are affected to get their personal affairs in order while they are able to.”

Alzheimer’s disease accounts for 60 to 80 percent of dementia cases, according to the Alzheimer’s Association. AD typically affects adults age 80 and older, but a minority of people under age 65 develop early-onset AD. New data from the Centers for Disease Control and Prevention (Morbidity and Mortality Weekly Report, May 26, 2017) shows that death rates from AD increased by 55 percent between 1999 and 2014.

“Possible reasons for the uptick include the fact that cardiovascular-related deaths are declining,” says Dr. Bloom. “This means that more people survive into the age range most associated with AD.”

AD is characterized by the build-up of abnormal proteins that form clumps and tangles in the brain, disrupting communication between neurons (brain cells) and impacting memory, thinking, and behavior. The effects develop gradually, over time: people with AD may notice memory lapses, but the symptoms also include getting stuck for words, regularly misplacing things in odd places (for example, you might put your glasses in the cutlery drawer), becoming less adept at coordinating tasks (you might cook the vegetables before you put the chicken in the oven), and getting lost in familiar surroundings.

“As the disease progresses, it also begins to impact a person’s emotions and mood, potentially making them agitated, short-tempered, hostile, and subject to delusions,” Dr. Bloom notes. “Poor sleep is also a common problem, as is wandering.”

There currently is no cure for AD, although drug treatment can help mitigate memory symptoms in some people. The drugs support communication between neurons, but tend to be effective for just a short period of time—they don’t delay AD progression.

“There are no drugs currently approved by the Food and Drug Administration to treat the behavioral issues that develop as AD progresses, but antidepressants and antipsychotic medications may be prescribed off-label to help manage anxiety, agitation, and aggression,” Dr. Bloom adds.

It is hoped that ongoing advances in understanding the nature of AD will eventually benefit treatment of the disease, but progress is slow. One thing seniors can do to help forward momentum is take part in clinical trials that may provide answers for the future (see What You Can Do).

While a gradual, stable decline in memory and thinking abilities are a hallmark of AD, VaD tends to happen in steps. “There will be a sudden decline after a stroke, followed by a period of stability, and then further sudden deterioration if another stroke occurs,” Dr. Bloom says. “The cognitive effects also tend to initially manifest as problems concentrating and communicating—memory problems develop later.”

VaD also is associated with depression, but it typically doesn’t cause the personality changes that occur with AD until it reaches a late stage. “This is because VaD affects distinct parts of the brain, unlike AD, which affects the whole brain,” Dr. Bloom explains. “That said, it can still be difficult to differentiate between AD and VaD because some people develop both types.”

The risk for both VaD and AD increases if you are at high risk for stroke, and if you actually suffer a stroke, your risk for dementia doubles (though not everybody who suffers a stroke will go on to develop dementia). A recent study (Alzheimer’s & Dementia, March 28) suggests that lowering your risk for stroke by consuming a healthy diet, getting plenty of exercise, not smoking, and controlling high blood pressure (a major risk factor for stroke) may curtail the incidence of VaD. In the study, new stroke diagnoses in the highest-risk group (people aged 80 and older) fell by 37.9 percent in 10 years—and during the same timeframe, dementia diagnoses in this age group fell by 15.4 percent.

“Lifestyle modifications also may help slow the rate of cognitive decline in people who already have VaD,” Dr. Bloom adds. “There is evidence that some of the drugs used for AD memory symptoms may help some people with VaD—however, as with AD, their effect is modest.”

Lewy body dementia is characterized by an abnormal build-up of protein deposits called Lewy bodies in the brain. “While alpha-synuclein protein, the chief component of Lewy bodies, is found widely in the brain, its normal function isn’t yet known—nor is it known why the protein accumulates in some people,” Dr. Bloom says.

Lewy bodies also are present with Parkinson’s disease, and many people with LBD also have the abnormal protein plaques and tangles that are characteristic of AD. LBD shares symptoms with both AD and Parkinson’s, and it’s possible that a person with dementia may have changes in the brain that stem from more than one of these conditions.

“The memory impairment that accompanies early LBD tends to be less prominent than it is in early AD,” says Dr. Bloom. “Conversely, delusions, hallucinations and misidentifying familiar people are more prominent in early LBD, as are noticeable fluctuations in alertness, and movement issues that are reminiscent of Parkinson’s disease, such as a hunched posture, balance problems, a shuffling gait, and rigid muscles.”

As with AD, there is no cure for LBD, and treatments are aimed at managing the behavioral and movement symptoms. “Drug treatment requires very close monitoring, since certain medications that are given to people with AD and Parkinson’s disease can worsen LBD symptoms,” Dr. Bloom says. “Keep in mind that LBD typically has a very precipitous decline, which may be important in terms of planning.”

Frontotemporal dementia (also known as Pick’s disease) is most likely to affect people younger than age 65 (the average age at diagnosis is 57, according to the Association for Frontotemporal Degeneration).

Men are more vulnerable than women, but the only clear risk factor is having a family history of dementia. “FTD is characterized by the degeneration of neurons in the frontal and temporal lobes, and results not so much in loss of memory as in deterioration in social and interpersonal behavior, apathy, and blunted emotions,” Dr. Bloom explains.

Specific symptoms vary, but in general, people with FTD lose their inhibitions and sense of judgment, and behave irrationally and impulsively (for example, they may make tactless comments about somebody’s appearance). Their sense of empathy becomes blunted, and they may become emotionally withdrawn.

Personal hygiene also suffers, as does the ability to plan and organize. “FTD also has overlaps with a condition called primary progressive aphasia, which causes language impairments as well as deficits in memory and executive function,” Dr. Bloom adds.

Language impairments that may occur include difficulties with reading and writing, and with finding the right word for naming objects (for example, people with FTD may refer to “the thing that opens cans,” instead of the can-opener). Their speech may become generally hesitant, and they may omit pronouns when speaking. About 10 to 20 percent of people with FTD develop movement disorders that are not unlike those of Parkinson’s disease.

There is no cure for FTD, but antidepressants and antipsychotics may help to control its behavioral symptoms. People with the condition also may benefit from speech and communication therapy.

If you are experiencing memory issues, mention them to your doctor, but try not to panic—not every problem you experience with your memory as you age signals dementia. Advancing age can make you prone to “senior moments” because older brains process information and retrieve memories more slowly. Forgetfulness also can be related to simply being tired (mention fatigue to your doctor, particularly if you wake feeling tired after apparently sleeping well—it’s possible you may have a sleep disorder).

Poor concentration and slower thinking may be symptoms of depression (other signs include sadness, decreased pleasure in activities you’ve always enjoyed, and irritability), which is a treatable illness. Physical illness, such as hypothyroidism (underactive thyroid) can result in memory problems, while a urinary tract infection can cause forgetfulness and confusion. Medications also can impact cognition, especially if you take several drugs.

“Unfortunately there is no ‘magic bullet’ that can prevent cognitive impairment or dementia,” Dr. Bloom observes. “However, research has associated better heart health, greater physical fitness, good nutrition and continuing social engagement with less likelihood of developing AD and other dementias in old age.”