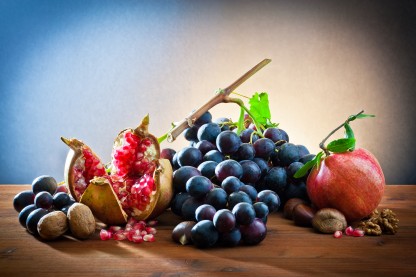 Most people with high triglycerides are told to cut down on certain types of foods, like trans fats and added sugars. Rarely, however, do health care providers offer advice about which specific foods patients should enjoy more often. A new study might just change that.

A high triglycerides diet that contains foods that are naturally rich in polyphenols lowers triglycerides and reduces oxidative stress, according to results of a randomized controlled trial recently published in The American Journal of Clinical Nutrition.[1]

Polyphenols are naturally occurring compounds that exist in plants and plant products, including fruits, vegetables, nuts, herbs, cocoa, and tea. While polyphenols are not essential nutrients, research in the last decade has revealed their dramatic role in improving health. For example, consuming plenty of foods high in polyphenols is associated with a lower risk of cardiovascular disease.[4]

Thousands of different polyphenols exist and are classified based on their chemical structure. Four classes of polyphenols are found in foods: flavonoids, lignans, phenolic acids, and stilbenes. Research on the impact of polyphenols on cardiovascular disease has primarily focused on the flavonoid class, which is divided into the following primary six sub-classes:

Critical to their beneficial impact on cardiovascular disease is polyphenols’ (especially the flavonoids’) role in countering inflammation and oxidative stress, both of which are now known to be key underlying causes of cardiovascular disease.[3]In addition, some polyphenols, such as proanthocyanidins, also directly reduce triglycerides. While researchers are still trying to figure out the exact mechanisms by which they lower triglyceride levels, it appears that proanthocyanidins regulate the expression of certain genes that control how fats are metabolized by the liver.[5]

In the recent study, one of the first controlled studies of its kind, researchers at Federico II University in Naples, Italy, evaluated the effects of diets naturally rich in polyphenols and/or omega-3 fatty acids from fish on triglycerides and oxidative stress. The study involved 86 overweight or obese subjects with a large waist circumference (men >40.2 inches, women >34.6 inches) plus one or more of the following components of the metabolic syndrome: triglycerides≥150 mg/dl, HDL cholesterol <40 mg/dl (men) and <50 mg/dl (women), or fasting blood sugar (glucose) 100 to 125 mg/dl.

Each subject was randomly assigned to one of four diets, all containing the same number of calories.

The concentration of large very-low-density lipoproteins (VLDLs) was also significantly reduced in the groups eating the polyphenol-rich diets. VLDLs are a type of protein made by the liver to transport triglycerides. They contain both triglycerides and cholesterol and are converted in the bloodstream to LDL cholesterol.

How to lower your triglycerides using a polyphenol-rich diet

To follow a high triglycerides diet and lower your risk of heart disease and type 2 diabetes, eat plenty of darkly pigmented fruits and vegetables, aiming for a vibrant, rainbow-like spectrum of these foods:

Also include fish (and/or a fish oil supplement) and large green leafy vegetables for extra cardiovascular risk reduction. Your body will thank you for years to come, especially if you take care of your cholesterol and heart health using additional natural therapies.

Have you tried eating more polyphenols to lower your triglycerides? If so, how did it work? Do you have a favorite polyphenol-rich recipe? Please share your experience in the comments section below.