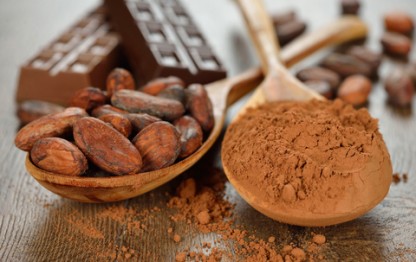 In part 1, you learned about the phytochemicals in dark chocolate and cocoa and how they benefit mood and brain performance. Now, in part 2, we’ll continue with an overview of cocoa benefits (from cocoa powder and dark chocolate) on heart health. Chocolate’s polyphenols, particularly its flavanols, act in numerous ways to influence the health of the heart and blood vessels, reducing the risk of heart attacks and strokes and other cardiovascular diseases, lowering blood pressure, and improving cholesterol levels.

From large observational studies, it is clear that cocoa intake, in the form of cocoa powder and/or dark chocolate, is associated with a lower risk of developing or dying from cardiovascular disease. For instance, the more dark chocolate people eat, studies show, the lower their blood pressure and their risk of stroke.[1-3] In individuals who suffered a previous heart attack, eating chocolate twice a week compared with never eating chocolate has been shown to lower the risk of death from heart disease by 66%.[4]

These associations between higher cocoa intake and lower cardiovascular disease risk have been confirmed in randomized, controlled, human studies. These clinical trials were recently analyzed and summarized by a team of researchers, including some from Harvard Medical School. The team of investigators in 2012 conducted a large analysis of human studies on cocoa and chocolate with respect to many important cardiovascular disease risk factors.[5] They started with a total of 1637 potential studies and ended up choosing 42 high quality, randomized, double-blind, placebo-controlled studies to systematically analyze. Their groundbreaking results, published in The American Journal of Clinical Nutrition, confirmed what many studies had previously concluded—that chocolate and cocoa have statistically significant effects on the following risk factors for cardiovascular disease:

The study authors were particularly impressed with the cocoa benefits on insulin resistance and blood vessel dysfunction. There has recently been an explosion of evidence that these two risk factors, which are very common in the millions of people with prediabetes, are vitally important for determining a person’s overall risk for cardiovascular disease, including coronary artery disease, strokes, and heart attacks. The fact that chocolate and cocoa consistently and significantly improves insulin resistance and endothelial dysfunction in studies has important consequences for cardiovascular risk, according to the study authors.

What type of chocolate and how much is needed to get cocoa benefits?

The type of chocolate/cocoa used in the studies included cocoa drinks, dark chocolate, and cocoa supplements. The total amount of chocolate and cocoa per day varied considerably between studies. Some of the chocolate and cocoa in the studies was “enriched” with extra flavanols, some was not. Generally, the higher the flavanol levels, the better the outcomes. But at least some studies show that plain dark chocolate is just as effective in terms of blood vessel health as the special chocolate/cocoa enhanced with extra flavanols.[6]

So how does this relate to what kinds of or how much dark chocolate or cocoa you need to consume in order to reap substantial cocoa benefits? At this point, no one knows exactly. But many researchers and clinicians agree that you do not need to buy the special flavanol-enriched chocolate or cocoa. Regular dark chocolate of at least 70% cocoa or cocoa powder, preferably organic and fair trade, will likely do just fine. As for how much to eat, around 40 to 50 grams (about 1.5 to 2 ounces) of dark chocolate (70 to 85% cocoa) roughly coincides with the amounts associated with therapeutic effects in studies.  However, even just a small square of dark chocolate 2 to 3 times a week is beneficial for heart health. Besides dark chocolate, you can also increase your intake of other flavanol-rich foods like tea and berries for additional benefits.

Tell us what you think about chocolate for heart health

What is your favorite way to enjoy dark chocolate or obtain cocoa benefits? Share your love (or not) of dark chocolate with other readers in the comments section, below.