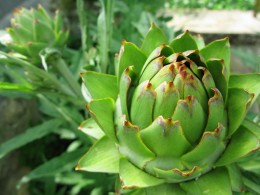 What does LDL cholesterol have to do with Marilyn Monroe? In 1947 a young Marilyn Monroe, still going by her name Norma Jean, was crowned Castroville, California’s first “Artichoke Queen.” The provocative Miss Monroe may have received this title due to the history of the plant – artichokes have been well-known for their aphrodisiac properties. In fact, until the 16th century, women were prohibited from eating artichokes in many countries because of this alluring reputation!  Recently, however, artichokes are gaining attention by the medical community for affecting the heart in a slightly different way.

The artichoke (Cynara scolymus) is technically a flower bud that has not yet bloomed. The plant belongs to the daisy family and is native to areas such as southern Europe and northern Africa. Traditionally, its leaves have been used to treat ailments like jaundice, acid reflux and various liver disorders. But, research studies now show that artichoke may have a new forte: lowering cholesterol naturally.

Researchers at the University of Reading have found that an over-the-counter Artichoke Leaf Extract (ALE) can lower cholesterol in otherwise healthy individuals with moderately raised levels.  During the trial, 75 volunteers were given 1,280 mg (4 capsules) of ALE each day for 12 weeks. ALE consumption resulted in a statistically significant reduction in total plasma cholesterol after the intervention period.[1]

The manner by which artichokes reduce cholesterol is not fully known. There’s some speculation that the cholesterol-lowering effect seen is due to cynarin, a compound in artichokes that boosts production of bile in the liver and the flow of bile from the gallbladder. These actions may help the body excrete cholesterol.

Artichokes also contain other antioxidants such as flavonoids, vitamin C, folic acid and magnesium. These antioxidants are thought to play a role in lowering the oxidation of LDL, which contributes to atherosclerosis (plaque in the arteries).

How to Take Artichoke Leaf Extract: