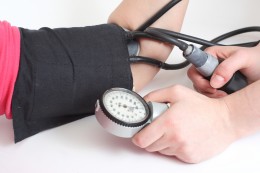 Are you at risk of becoming part of the global 26% of adults with high blood pressure, putting you at increased risk for heart disease and strokes? If so, including low-fat dairy or yogurt in your diet can help keep blood pressure under control according to two new studies. While the identification of these foods as high blood pressure remedies is not new, the studies help to build the growing repertoire linking their consumption to lower blood pressure.

In the first study, researchers found that eating a six-ounce cup of low-fat yogurt every three days lowered the risk of developing high blood pressure by 30% compared to those who at one or less servings of yogurt per month. This study examined the effects of consuming low-fat yogurt in just over 2000 adults. Results of the study, funded by Dannon, were presented by a Tufts University doctor at the American Heart Association High Blood Pressure Research 2012 Scientific Sessions in September.

Commenting on the findings, Dr. Rachel Johnson, chair of the American Heart Association’s nutrition committee, said that the yogurt study reinforced what’s already known about the role of dairy products in the diet.[2]  But she warned that while yogurt can be an effective way to add more dairy products to your diet, care must be taken regarding the amount of sugar in yogurt: “We know that added sugars have the opposite effect on BP, so you need to watch the amount of sugar, and some yogurts are high in sugar.”[2]

The second study, performed by nutrition researchers in the Netherlands, was a large analysis of nine different studies including over 57,000 subjects that have looked at how dairy consumption influences the risk of high blood pressure.[3] The researchers found that people who ate the most total dairy, particularly in the form of low fat dairy and milk, were significantly less likely to develop high blood pressure. The average intake was about 7 ounces (200 grams) low fat dairy or milk per day.

Not surprisingly, cheese and high-fat dairy were not high blood pressure remedies. Neither did yogurt, although the researches did not look at just low-fat yogurt. Had the researches done a separate analysis for low-fat yogurt only, the results may have corroborated those from the Tufts study, above. Other studies have found the association between maintaining normal blood pressure and dairy consumption to be true for both yogurt and milk.[4]

Berries are One of the Most Effective High Blood Pressure Remedies

If you’re avoiding dairy because of lactose intolerance, a milk allergy, or for other reasons, there are still plenty of other high blood pressure remedies you can include in your diet. Plant foods contain chemicals known as polyphenols, which have been shown to have blood pressure-lowering effects. A particular type of polyphenol, a flavonoid called anthocyanin which is found especially in berries, has been shown to be strongly associated with preventing hypertension.[5]

More generally, diets higher in plant foods, such as the Mediterranean diet, contain more blood-pressure lowering polyphenols. In fact, European guidelines currently stress that simply increasing your consumption of vegetables and fruit is a key way can lower your blood pressure if it’s slightly increased.  To learn more about these and other natural high blood pressure remedies, view our resources on the topic.