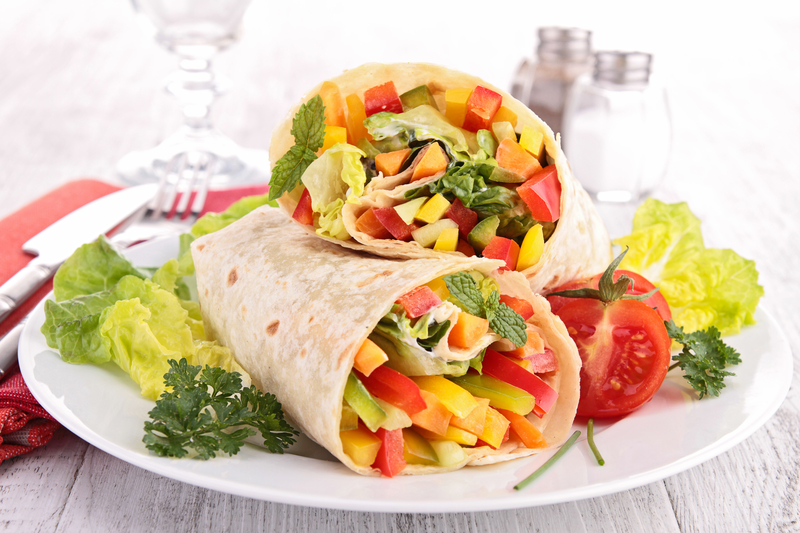 A vegetarian diet has proven to provide health benefits to both children and adults. Pictured: vegetable wrap.

Whenever I have considered going vegetarian or vegan, I have always decided against it for one simple reason: I enjoy meat, from roasted chicken to the occasional steak to fresh salmon. I already avoid many animal products like dairy and eggs, and much of my diet already is plant-based, but I’m not sure I could give up meat entirely.

While I believe that for me personally, the meat I eat in moderation is part of a nutritious and healthy diet, a vegan diet has a long list of health benefits for those that are dedicated enough to follow it. Studies show that a vegan, plant-based diet benefits adults and children alike. A study following 1,475 people who ranged from vegan to vegetarian to all-out meat-eaters found that vegans had a lower intake of cholesterol, total fat, saturated fat, and sodium, and higher intake of dietary fiber and polyunsaturated fat compared to those on an omnivorous diet. Some of these differences were particularly striking; for example, sodium intake in vegans was less than half of that for people who were eating meat. The vegan diet received the highest scores on two scoring scales that predict positive health outcomes.[1] Other studies on vegan diets have found similar results.[2]

As vegans tend towards healthier consumption of many nutrients, such as lower cholesterol and higher fiber intake, it is not surprising that these trends often translate into improved health. People following a vegan, plant-based diet tend to show greater weight loss and better BMIs than those eating meat, and they can be at a reduced risk for high blood pressure, type 2 diabetes, and mortality from cardiovascular disease.[2,3]

A lot has been said about millennials—the group of 80 million Americans born after 1980 and before 2000. While they have been called coddled and narcissistic, the young generation also has some more positive attributes.

A recent Pew Research Center report highlights various qualities of millennials, including confidence, self-expressiveness, and openness to change. One notable characteristic is their attitude about food. This generation has been hammered with health-conscious messages and the importance of sustainability since early childhood.

So, it’s no wonder the report found 12 percent of millennials are vegetarians, compared to 3.3 percent of the general adult population per The Vegetarian Resource Group 2016 poll.

Plant-based eating among millennials has made a direct impact on food offerings, with more vegetarian restaurants in cities and meat alternatives on supermarket shelves, as well as a renaissance for ancient grains (such as quinoa and sorghum), pulses (beans and lentils), seeds (like chia and hemp), and nuts (including almonds and walnuts).

Considering the new Dietary Guidelines lists the Healthy Vegetarian Eating Pattern as one of three optimal eating styles you might want to consider (along with the Healthy Mediterranean-Style and Healthy U.S.-Style), maybe it’s time for all of us to turn a bit more plant-centric—no matter your age.
—Sharon Palmer, RDN
Editor, Environmental Nutrition

Reducing the Risk for Cardiovascular Disease in Obese Children

Cardiovascular disease can start in childhood. Obesity, even in childhood, can significantly impact your risk for developing heart disease later in life.

A 2015 study assigned children with obesity and one of their parents to eat either a plant-based diet or the American Heart Association diet. Those on the plant-based diet avoided all animal products as well as any added fat, and were instructed to have a limited intake of nuts and avocado. The American Heart Association diet group could eat 30 percent calories from total fat, 7 percent calories from saturated fat, under 300 mg of cholesterol, and under 1,500 mg of sodium each day.[4]

Both groups showed improvements, but those on the vegan, low-fat diet had improvements in nine factors while those on the American Heart Association diet improved in only four. After four weeks, the plant-based diet group showed significantly reduced BMI, systolic blood pressure, weight, total cholesterol, LDL cholesterol, insulin levels, markers of heart disease like high sensitivity C reactive protein, and more. These changes are all related to a reduced risk of cardiovascular disease.[4]

These numerous plant-based diet benefits for your health might inspire you to try a vegan diet for you and your family. But this kind of diet is not easy, and oftentimes people who remove animal products from their diet have a hard time meeting the recommended values of many nutrients.[3] While vegans may have healthier intakes of things like cholesterol and fiber, studies show they often have the lowest calcium and protein intake compared to other diets; these levels can drop below the national dietary recommendations.[1]

But a vegan diet can encompass all your nutritional needs, if done correctly. Appropriate food choices, such as those rich in calcium, protein, and vitamin B12, with supplementation if necessary, can help to reduce the risk of becoming deficient in vital nutrients.

Need ideas? Try these substitutions for egg and dairy and recipes like this delicious quinoa salad or this scrumptious vegan pumpkin pie.