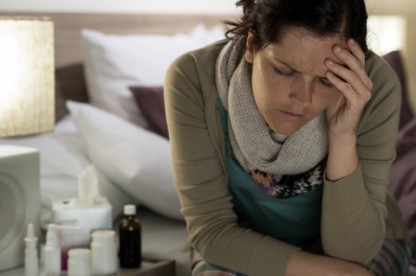 While many of today’s go-to natural cold remedies—like Echinacea—may work for prevention, they’re not well-proven to treat your cold symptoms once the virus has already taken hold. The good news, as you learned in part 1, is that there are some highly effective and very-well researched natural antiviral remedies for treating the common cold. You already know from reading part 1 about how Andrographis extract can take care of your cold symptoms. Now it’s time to get to know Pelargonium.

Pelargonium sidoides, also known as “Umckaloabo,” is a plant native to South Africa, where it has long been used to treat cough, sore throat, congestion, and other respiratory ailments. Recognizing its medicinal qualities, German researchers investigated various preparations of Pelargonium and developed a natural alcohol extract of Pelargonium roots, which they named EPs 7630. The researchers found that this Pelargonium root extract was especially good at boosting various aspects of immune function and was also able to directly prevent the replication of certain respiratory viruses. In human trials, the Pelargonium extract EPs 7630 has been found effective not only as a natural remedy for the common cold, but also for other viral infections involving the respiratory tract, especially acute bronchitis.

In one recent trial, 103 adults with the common cold were randomly assigned to take 30 drops (1.5 mL) three times a day of the Pelargonium root extract EPs 7630 or placebo.[1] Each subject received the treatment for a maximum of 10 days and rated the intensity of 10 different cold symptoms.

Another recent study investigated the efficacy of Pelargonium for treating common cold symptoms and preventing asthma attacks in children during upper respiratory tract viral infections.[2] Because it causes so much inflammation in the airways, the common cold often exacerbates asthma attacks in children with asthma. In this study, 61 asthmatic children with upper respiratory tract viral infection were randomized to receive Pelargonium for 5 days or not. Treatment with Pelargonium significantly reduced cough frequency, nasal congestion, and the likelihood of having an asthma attack.

Try Pelargonium for bronchitis, too

Acute bronchitis, sometimes called a chest cold, occurs when the bronchial tubes in the lungs become inflamed and produce mucus, causing a cough as well as chest pain and shortness of breath. This often occurs after an upper respiratory infection like a cold. Most symptoms of acute bronchitis last for up to 2 weeks, but the cough can last for up to 8 weeks in some people.

In addition to being able to shorten the duration and treatment of the common cold, Pelargonium has been shown in numerous studies to effectively treat acute bronchitis. At least 4 of 5 randomized controlled trials show that Pelargonium extract EPs 7630 significantly decreases bronchitis symptoms.[3] In fact, Pelargonium is so effective compared to placebo for patients with acute bronchitis that it has been approved as a drug for this condition in Germany.

The same Pelargonium root extract developed by German researchers and sold as a drug in Germany (EPs 7630) is available as a supplement in the U.S.  It is sold by Nature’s Way under the brand name Umcka® ColdCare and by Integrative Therapeutics under the brand name V CLEAR EPS 7630™. The recommended dose for both children and adults is 30 drops (1.5 mL) three times a day. This same dose has been studies and found effective for treating acute bronchitis.

Have you tried Pelargonium (Umcka)? What was your experience? What other natural cold remedies have you tried that have helped? We want to hear from you. Let us know in the comments section, below.[1]