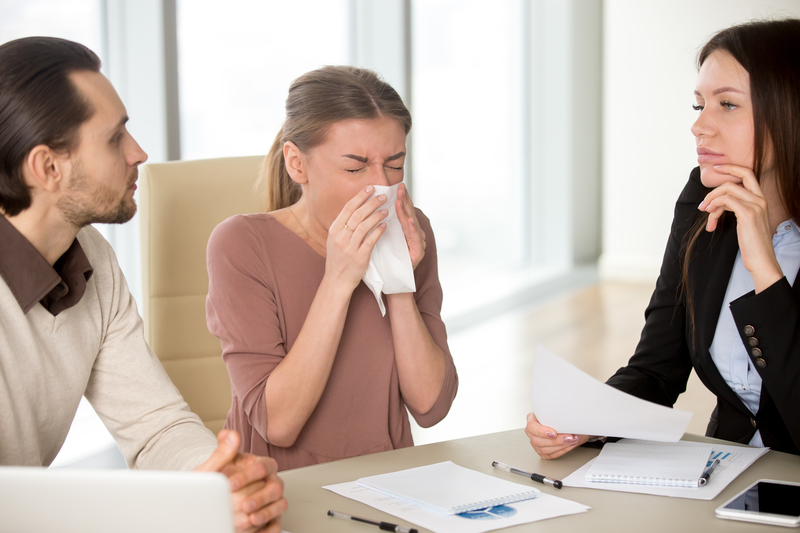 How long is the flu contagious? Surprisingly to some, it can be infectious even before symptoms show up, and can remain infectious up to seven days after becoming sick.

If you’re among those who, unfortunately, become infected with the influenza virus, the first questions you’ll no doubt ask will be “How long will I suffer with symptoms?” and “How long is flu contagious?”

According to a national survey conducted in 2013, confusion abounds when it comes to flu facts. To learn the truth about shortening the duration of your symptoms and how to protect your loved ones from contracting your illness, read on. The answers may surprise you!

How Long Is the Flu Contagious…?

In the aforementioned study by the National Foundation for Infectious Diseases, participants were asked: “How long is flu contagious?” The results indicated that 41 percent of individuals thought the flu is contagious only while symptoms are present—a common misconception. It’s simply not true. In reality, the flu can be contagious before symptoms even begin.

According to the Centers for Disease Control and Prevention, most adults with the flu virus are contagious starting the day before symptoms begin. They continue to be contagious as long as seven days after becoming sick. Children can pass the virus for longer than the seven-day period.

And overall, people are most contagious within the first three to four days after they have been infected.

…And How Long Does the Flu Last?

The flu typically lasts between a week and two weeks. (See our post How Long Does the Flu Last?). As noted above, flu symptoms are most severe during days 2 and 3, with less severe symptoms persisting through days 4 to 7 (or longer). Taking the anti-flu medication Tamiflu or using natural remedies (see below) may help lessen the duration or severity of flu symptoms.

What Are the Most Common Flu Symptoms?

Flu symptoms usually come on suddenly, and begin within one to four days after infection. The most severe symptoms exhibit on the second and third days.

The most common early flu symptoms in adults include fatigue, scratchy or sore throat, and muscle/joint aches and pains. Other symptoms of influenza include:

Flu symptoms in children are typically the same as adults; however, children may also experience earaches in one or both ears.

Both adults and children can have diarrhea, nausea, or vomiting, although these are less common flu symptoms. When they do occur, they’re more likely to show up in children.

How Does the Flu Spread?

A survey performed by the National Foundation for Infectious Diseases reported that 44 percent of respondents thought that flu spreads when we come into contact with surfaces that have been touched by someone with the flu. However, this is not accurate.

The flu is spread when a person is near an infected individual who sneezes, coughs, or talks. According to the Centers for Disease Control (CDC), a person who has the flu can spread the virus when he’s about 6 feet away from another individual. The infected person releases droplets that can land in the mouths or noses of people who are nearby, or the droplets can be inhaled in the lungs.

Infected flu droplets also can land on surfaces. Non-infected individuals who touch a surface with their own mouth, nose, or eyes (e.g., toddlers or babies sharing toys and putting them in their mouths or adults sharing utensils) can get the flu if the droplets are present .

WHEN IS FLU SEASON?

The influenza virus can be spread throughout the year, but the highest number of cases are seen during the fall and winter months. Typically, flu cases start increasing toward the end of October and peak between December to February. Flu cases then begin to decline between March through May.

How Can I Treat the Flu?

Doctors recommend flu prevention by getting an annual flu vaccine. If it’s too late for the vaccine and you or a loved already has flu symptoms, make an appointment with your doctor to get tested and ensure you’re actually dealing with the flu and not a cold or other respiratory illness.

The flu is treated with prescription antiviral drugs such as Tamiflu. You can also use natural home remedies to fight flu symptoms. A comprehensive list of natural remedies can be found here: Best Flu Remedies Backed by Scientific Studies.