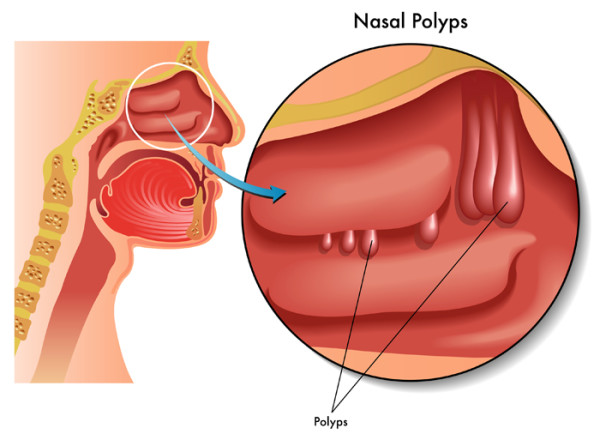 Nasal polyps—small, noncancerous growths block the nasal passage—can cause a loss of smell.

You often lose your sense of smell when fighting a cold, nasal allergy, or infection. But this condition is temporary, and your ability to recognize scents again returns when your ailment has cleared. For many older adults, however, the sense of smell gradually begins to weaken and fade—sometimes caused by nasal polyps—until they completely lose the ability to smell, a condition called anosmia.

Without your sense of smell, food tastes different, you cannot smell the scent of a flower, and you could find yourself in a dangerous situation, being unable to detect odors from a gas leak or smoke.

Nasal Polyps, Injury, and Other Causes of Anosmia

While advancing age is the most common causes of anosmia, there are others. These include:

Symptoms and Screening for Diagnosis

Besides the obvious loss of smell, some people may notice a change in how certain items do not smell the same or have the same intensity or aroma.

Your doctor can examine inside your nose to determine whether an infection or nasal polyp or growth has impaired your ability to smell.

Further testing also may be needed from an ear, nose, and throat specialist (otolaryngologist). A CT scan may be done to get a clearer look of the area.

Unfortunately, anosmia is not always treatable, especially if age is the cause. Over-the-counter medications or prescribed antibiotics can clear up loss of smell from colds or allergies. If a nasal polyp or growth is present, surgery may be needed to remove the obstruction. Consult your doctor if you suspect a medication may the cause.