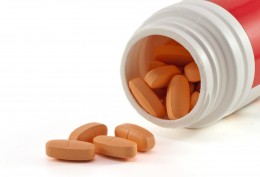 Can taking vitamins really give you more energy?  Based on the results of numerous research studies, the answer is, “Yes!” Taking vitamins for energy has been shown in a number of randomized, double-blind, placebo controlled-clinical studies (the gold standard for evaluating a treatment) to increase energy and decrease fatigue.

Studies have tested the effects of various combinations of vitamins and minerals, similar to what would be included in a good quality multivitamin, on fatigue and found positive results. For example, one study tested the effects of a daily effervescent tablet containing 500 mg vitamin C, B-vitamins, calcium, magnesium, and zinc in 215 healthy males in the UK, aged 30 to 55 years.[1] After 33 days, the group receiving the vitamin supplement reported statistically significant increases in self-reported energy and ‘vigor’ ratings and less mental tiredness compared to placebo. They also had improved general mental health, lower subjective stress, and they performed significantly better on a series of mental tests designed to detect fatigue.

Utilizing the same vitamin/mineral supplement, the UK researchers then tested the same group of healthy men for 28 days by having them complete weekly cognitive tasks and a number of visual analogue scales before and after a full day’s work.[2] The participants in the vitamin/mineral group rated themselves as having greater physical stamina, concentration, mental stamina, and subjective alertness compared to the men in the placebo group.

Taking vitamins for energy doesn’t just work for men. Vitamin/mineral supplements also help healthy women beat fatigue. The beneficial effects of a multivitamin on fatigue, mood, and cognitive performance in healthy females aged 25-50 years were tested in a placebo-controlled, double blind, randomized trial.[3] After 9 weeks, the women in the multivitamin group had significantly less fatigue and improved moods after completing a series of cognitively demanding tasks than did the women not taking the multivitamin. Furthermore, the women in the vitamin group significantly improved their multi-tasking performance in terms of accuracy across all tasks.

Older adults can also take advantage of vitamins for energy. Another study, this one in older adults averaging about 70 years of age who consumed on average less than 4 servings of fruit and vegetables daily, looked at the effects of a taking a vitamin and mineral fortified nutritional beverage for 16 weeks.[4] The group that received the supplement showed statistically significant increases in vitality, a validated measure of energy/fatigue. They also had significantly improved perceptions of their general health.  The control group demonstrated no such benefits.

The studies in these examples demonstrate the benefits of relative simple and straightforward combinations of minerals and vitamins for energy. Many high-quality, high-potency multivitamins would contain a similar or even improved set of ingredients.  So, if you are feeling tired all the time, taking vitamins for energy can be a simple solution that you can start today!  Head to your local health food store or shop online for a quality multivitamin/multi-mineral supplement that contains these chief nutrients: vitamin C, B-vitamins, calcium, magnesium, and zinc.  Often it will require three or more capsules as the daily dosage in that quality multivitamin to contain enough of the nutrients you need. And, keep checking back to our site as our future articles, will focus on studies that have examined the effects of other supplements that contain additional fatigue-fighting ingredients such as herbal extracts, antioxidants, fatty acids, amino acids, and phytochemicals.

Originally published in 2012, this blog has been updated by the editors of University Health News.