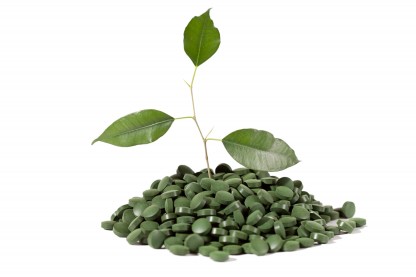 Chlorophyll is the green molecule in plant cells that absorbs sunlight during photosynthesis. Interestingly, it not only provides plants with energy; chlorophyll benefits human energy production as well. It helps restore antioxidant content in the bloodstream, and it prevents the digestive system from absorbing toxins, as well. Anything green contains chlorophyll, but leafy green foods such as lettuce or cabbage contain the highest concentration.[1]

In humans, the energy molecule ATP is manufactured by mitochondria, which are small organelles that exist in many different types of cells. Chlorophyll accumulates inside the mitochondria of mammals that eat a chlorophyll-rich diet.[2] Once there, the chlorophyll can transfer electrons to coenzyme Q-10, an extremely important molecule that is discussed here. This greatly accelerates ATP production in the mitochondria, and more energy is available as a result.[3]

Aflatoxin is a poisonous and carcinogenic compound that comes from the mold Aspergillus flavus, which is commonly found on grains and legumes.[6] This includes breads and peanuts, making aflatoxin very common in most human diets. Fortunately, dietary chlorophyll has been shown to reduce the amount of aflatoxin that is absorbed through the intestines and into the bloodstream of humans.[7] Studies indicate that chlorophyll consumption reduces aflatoxin in the liver by 75%, and it causes aflatoxin in the colon to fall by 63%.[8]

Chlorophyll even reduces the likelihood of tumor development resulting from aflatoxin, providing powerful protection against the development of colon and liver cancer.[7] Further, a 2006 study conducted in the Netherlands found that men with a low consumption of the chlorophyll molecule in combination with high consumption of the heme molecule found in red meat experienced an increased risk of developing colon cancer.[9]

How to get the most chlorophyll benefits

A diet rich in green vegetables will provide ample chlorophyll benefits.[10] Supplemental chlorophyll is also available in liquid and capsule formulations, which can be found in most local herbal stores. The company Nature’s Sunshine makes a high quality liquid chlorophyll concentrate that can be simply added to water. Its benefits can be gained by drinking only 1 tablespoon twice daily.