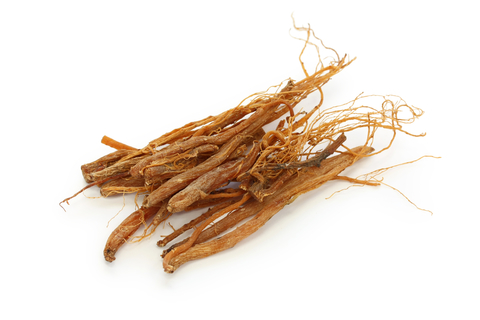 For those suffering with pain, fatigue, and other fibromyalgia symptoms, trying a supplement of Panax ginseng makes perfect sense.

Ginseng is one of the most well-known, commonly used supplements in the world, and for good reason: it’s a known fatigue-fighter, stress-buster, and overall vitality-booster. But Panax ginseng benefits have mainly been demonstrated in studies using healthy people as subjects and researchers have been wondering if its virtues extend to people with fibromyalgia, chronic fatigue, and other illnesses. In a recent randomized, double-blind, controlled clinical trial, Brazilian researchers compared ginseng supplements to both placebo and amitriptyline, the most commonly used drug (an antidepressant) for fibromyalgia, and found some surprising results.[1]

Amitriptyline has been used with some success for treating chronic neuropathic pain and fibromyalgia at doses of 12.5 to 50 mg per day. However, it is associated with numerous common side effects including drowsiness, dizziness, weight gain, and increased hunger. The researchers knew about the many Panax ginseng benefits in terms of fatigue and pain relief, and they wondered if it would help relieve these symptoms in women suffering from fibromyalgia without all the side effects and safety issues that accompany drugs like amitriptyline.

Over 12 weeks, a total of 38 women with fibromyalgia, aged 27 to 58, were given 100 mg per day of ginseng, 25 mg per day of amitriptyline, or placebo, taken once daily. The ginseng supplement contained Panax ginseng, also known as red Korean ginseng, an herb that has been used for hundreds of years in Eastern medicine. The herb (actually a root) was standardized so that it contained 27% ginsenosides. Ginsenosides are the primary medicinal constituents responsible for many Panax ginseng benefits.

The ginsenoside compounds are well-researched and have been found to act on the immune and central nervous systems. They have been found to decrease pain and boost immune function.[2,3] Panax ginseng and its constituents have also been found to improve brain function and liver function and to have anti-tumor, anti-diabetic, anti-fatigue, anti-stress, anti-aging, and antioxidant effects.[4]

Widespread pain, which researchers believe results from problems in how the brain processes pain signals, is one of the primary symptoms of fibromyalgia. Compared to their pain before the study, those taking the daily ginseng supplement had significantly less pain by the sixth week of treatment. By then, the ginseng group reported a 31.7% reduction in average pain. By the 12th week of treatment, the average pain of those taking ginseng was reduced by an average of 39.4%. Those taking the amitriptyline had similar reductions in pain, and, surprisingly, so did those taking the placebo.

Fatigue and poor sleep are common, debilitating symptoms in those suffering from fibromyalgia. There were statistically significant reductions in the average scores for fatigue in the group that received the ginseng compared to baseline. By the third week of treatment, the Panax ginseng benefits included improvement in fatigue by25.9% and by the 12th week, fatigue was reduced by 46.5% while sleep quality improved by 44.3%.  Just as seen with pain symptoms, the groups taking the amitriptyline and the placebo also experienced statistically significant improvements in fatigue and sleep quality that were similar to those taking the ginseng.

Anxiety, another symptom commonly reported by those with fibromyalgia, also improved in those taking ginseng. There was a 55.5% reduction in anxiety by the 12th week of treatment in the ginseng group. Again, those taking the placebo and the amitriptyline also experience significant improvement in anxiety, although unlike the other symptoms, ginseng was less effective than amitriptyline in improving patients’ anxiety.

What does it mean that the Panax ginseng benefits were equal to amitriptyline and placebo?

Given that pain, fatigue, sleep, and anxiety improved to a similar degree not only in those taking ginseng but also in those taking amitriptyline and the placebo, what can we make of these findings? Were these apparent Panax ginseng benefits real? While it is going to take additional, larger studies, perhaps using different ginseng dosages, to more definitively answer this question, the fact that those taking the ginseng supplement did experience statistically significant improvements in pain, fatigue, sleep, and anxiety compared to baseline is meaningful. So is that fact that the ginseng performed just as well as amitriptyline for all symptoms except anxiety (and even for anxiety, ginseng still performed excellently). Also worth noting is the fact that ginseng was able to effectively reduce fatigue more quickly than amitriptyline (within three weeks).

How to use Panax ginseng

For those suffering with pain, fatigue, and other fibromyalgia symptoms, trying a supplement of Panax ginseng makes perfect sense. This classic natural remedy is a safe, commonly used supplement that is easily obtained around the world and has long been utilized to assist the body in adapting to physical and emotional stress. Panax ginseng benefits can be obtained in the form of tablets, capsules, teas, and tinctures. As a naturopathic physician who prescribes herbs frequently, I like to use capsules because they are simple to take and can be standardized to the amount of the active ginsenosides. The study described above used capsules containing 100 mg of Panax ginseng standardized to 27% ginsenosides, at a dose of 100 mg per day. It is more common to see extracts standardized to a lesser percentage of ginsenosides, such as 15%. In this case, taking at least 200 mg per day would be recommended. I personally recommend 200-400 mg twice a day between meals of an encapsulated Panax ginseng that has been standardized to 15% ginsenosides.

True recovery from fibromyalgia, chronic fatigue syndrome, and other fatigue-related conditions usually requires a multi-system, multi-pronged approach that incorporates not only herbal supplements like Panax ginseng, but other integrative therapies as well, including additional supplements as well as diet and lifestyle changes to help deal with nutrient deficiencies, hormonal imbalances, and immune dysfunction. The road to recovery from fibromyalgia is complex, but your pain, fatigue, sleep, and mood symptoms CAN be effectively treated with help from powerful herbs like Panax ginseng.