Home » Daily » Energy and Fatigue » Mononucleosis: How to Recover from (and Avoid) the “Kissing Disease” 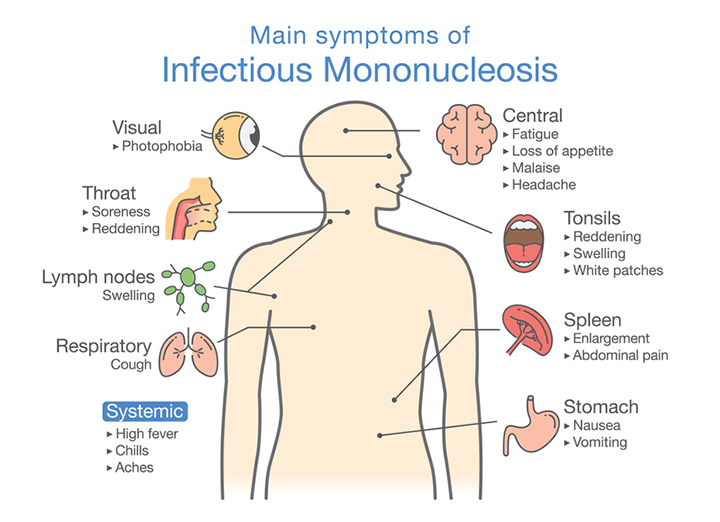 You probably first heard of mononucleosis, or “mono” for short, while you were still in high school. You may have never had it yourself, but perhaps you envied (just a little bit) your friends who got it, if only because they got to spend a few weeks at home while you had to keep showing up to class. Despite that tiny stroke of “luck,” mononucleosis isn’t very fun for those that get it.

Infectious mononucleosis is a viral infection that spreads from person to person through bodily fluids, such as saliva, which is why it’s sometimes called the “kissing disease.” It’s most common among teenagers and young adults and is often caused by the Epstein-Barr virus, which is a member of the herpes virus family.

Once a person is infected with mononucleosis, he or she remains contagious from the time of infection until about 18 months after symptoms have subsided. After that, the virus remains dormant within the body for the rest of a person’s life.

The Epstein-Barr virus isn’t the only way someone can contract mononucleosis. Other infections that can cause the infection include:

IS THERE A CONNECTION BETWEEN MONONUCLEOSIS AND THE FLU?

According to a recent study conducted by the American Society for Microbiology, there is a connection between the onset and severity of mononucleosis and the T-cells that react to both the Epstein-Barr virus and the influenza A virus, which causes the flu.

Researchers studied blood samples from college students after collecting the samples over the past 10 years: 32 with mono and 17 who were healthy but tested positive for the Epstein-Barr virus. Those with severe cases of mononucleosis had 25 times more T-cells that reacted to both influenza A and the Epstein-Barr virus than the healthy cases. Those with mild mono symptoms had 10 times more T-cells than the healthy cases.

“If you have a lot of these flu memory T-cells in your tonsils and you get EBV, instead of silently hanging around, it activates those memory cells,” said Liisa Selin, pathologist and study leader at the University of Massachusetts Medical School.

Selin added that if young adults could protect themselves from the flu by getting vaccinated, they would be less likely to develop severe mononucleosis after becoming infected with the Epstein-Barr virus.

Symptoms usually begin to appear about four to seven weeks after a person is first infected and, according to the CDC, can include:

Adults over the age of 40 may not experience all (or any) of these symptoms; however, liver inflammation and muscle aches are more common in this group.

If your doctor suspects that you have mononucleosis, he or she will order a complete blood count (to check for changes to your white blood cell count) as well as a monospot test (which is used to detect mononucleosis). Your doctor may also order an EBV antibody test, which detects specific antibodies to the Epstein-Barr virus.

Most people get mononucleosis only once in their life, but in rare cases, the infection can return with mild or no symptoms. If you have a weakened immune system as the result of pregnancy, an organ transplant, or HIV, the virus is more likely to reactivate in your system.

Although there is no cure for mononucleosis, there are many things you can do to improve symptoms and recover as quickly as possible.

How to Recover From Mono

Is There a Mononucleosis Vaccine?

Currently, there is no FDA-approved vaccine that protects against mononucleosis or the Epstein-Barr virus, although there are some in the advanced stages of testing and development.

In early 2018, researchers from the Fred Hutchinson Cancer Research Center at the University of Washington discovered a human antibody that blocks infection by the Epstein-Barr virus, which they say will aid in the development of an effective vaccine.

Scientists around the globe are taking a special interest in developing a vaccine because of the Epstein-Barr virus’ link to the development of various forms of cancer, including gastric cancer, nasopharyngeal carcinoma, and endemic Burkitt lymphoma, particularly in Uganda and China.

“The question out there is, Could we prevent these cancers with universal EBV vaccinations?” Dr. Edus H. Warren, head of the Fred Hutch Global Oncology, said in a statement. “It’s definitely something that would make sense in China because EBV causes a lot of morbidity and mortality there. In China, a vaccine would make an enormous difference.”

Is Red Bull Bad for You? Why You Shouldn’t Drink Energy Drinks